New Delhi: Terrorist violence in Jammu and Kashmir in 2012 was the lowest in two decades, Prime Minister Manmohan Singh said here today while stressing that the government’s strategy was working. 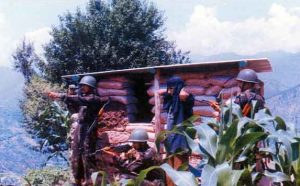 Stating that terror related violence in the volatile state had come down by one-third, the prime minister said: “In fact, terrorist violence parameters in 2012 have been the lowest since the upsurge in terrorist activities two decades ago.”

“Our strategy to prevent cross-border infiltration by militants and our intelligence based counter-terrorism operations in Jammu and Kashmir have resulted in a decline in the level of terrorist violence by about one-third in 2012 as compared to 2011,” he said at the chief ministers conference on internal security.

He said record inflow of tourists and pilgrims during 2012 was testimony to the improved security situation in the state.

Udaan schemes that were aimed at providing additional gainful employment to the youth had also achieved a fair measure of success.

The prime minister described the decline in terror violence and the implementation of developmental schemes as “welcome developments”.