New Delhi: The Supreme Court today suspended the Punjab and Haryana High Court order directing the National Highway Authority of India (NHAI) to take over 291-km Panipat-Jalandhar highway project as buiders had failed to complete it within the scheduled time. 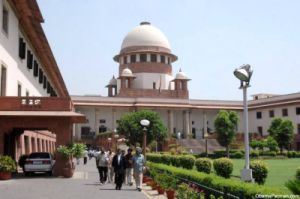 Suspending the operation of the high court order till the hearing of the matter July 23, a bench of Justice Gyan Sudha Misra and Justice Madan B. Lokur issued notice to the central and Haryana governments, the National Highway Authority of India and others.

Project concessionaire Soma Isolux NH One Tollway Private Limited had moved the apex court against the high court order. The project was originally scheduled to be completed by November 2011 and going by the undertaking given to the high court, the project should have been completed by 2012.

The concessionaire had expressed its difficulties in completing the remaining 40-km stretch of the Panipat-Jalandhar highway without the shifting of the toll plaza. It told the court that shifting the toll plaza to a new place was necessary for continued backing of its financiers for the project.

The court asked the NHAI to consult the central government if the shifting of the toll plaza from its existing location can be permitted, and if so, issue a letter to that effect to the concessionaire.

Otherwise, the court asked the NHAI to file an affidavit stating the reasons why the toll plaza could not be shifted to the site being sought by it.

In the last hearing of the matter June 10, senior counsel Abhhishek Manu Singhvi told the court that if the concessionaire were allowed to shift the toll plaza, they would complete the 40-km stretch of the highway in nine months from the date of such shifting.

At present the toll plaza is located at 146 km on the highway but the project concessionaire wants it to be shifted to km 110 (at Karnal).

The apex court also said that the stay of the high court order till July 23, would not pave the way for the resumption of building of the remaining 40 km of the highway or shifting of the toll plaza as sought by the project concessionaire.

It held that the project concessionaire could not be held responsible for the delay in the completion of the project as the highway authority too has contributed to it on account of its shifting stands.

As the court directed the listing the matter July 23, it asked senior counsel Indu Malhotra to try and hammer out some compromise formula so that project could be completed fast and general public was not put to inconvenience.