Mumbai: The Indian rupee today hit a new record low of 58.95 against a dollar on continued worries over current account deficit and increased demand for the US currency from importers in the absence of any intervention by the central bank. 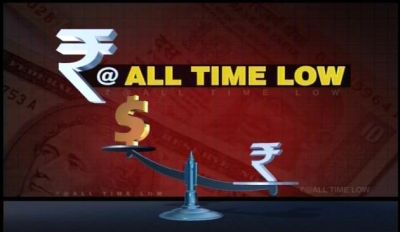 The partially convertible rupee weakened by 77 paise to hit a new low of 58.95 against a dollar at the interbank foreign exchange market here.

The Indian currency had registered its biggest fall in almost two years yesterday. It had slumped by 1.9 percent to close at 58.16 against a dollar.

The value of rupee has depreciated by more than eight percent in the past one and half month. It has dropped in 16 out of the last 18 trading sessions.

The rupee is under pressure due to worries over widening current account deficit and firming of the dollar against major global currencies, including the Euro and the Japanese Yen.

Absence of any intervention from the Reserve Bank of India (RBI) has intensified pressure on the rupee.

The slide continued even though the government said it was taking medium-term measures to control current account deficit.

Economic Affairs Secretary Arvind Mayaram said the panic in the market was “unwarranted”.

“I think this will settle down in a while. We should not worry but we are watching the situation closely,” Mayaram told reporters in New Delhi yesterday while reacting to the sharp drop in the value of rupee.