Shimla: The Himachal Pradesh government and the Indian Air Force today speeded up its operations to airlift tourists stranded for the past five days in Kinnaur district, which has been cut off following landslides, an official said here.

“Since 6.30 in the morning three choppers have been on job. So far 77 tourists were airlifted,” an official told. 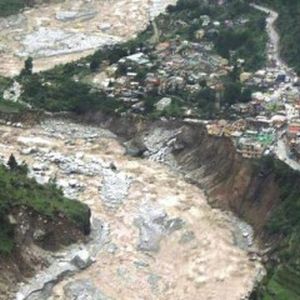 He said the weather is clear and the maximum number of people, both tourists and locals, would be airlifted from Sangla, Pooh, Kaza and Rekong Peo, the district headquarters.

The IAF has deployed two helicopters, while the state is using the chief minister’s official chopper.

Chief Minister Virbhadra Singh has called a meeting of government officials today in Mandi town, where he is touring for June 23 Mandi parliamentary by-poll, to take stock of situation that arose due to heavy devastation and destruction in Kinnaur.

Official sources said over 1,100 tourists, mainly from West Bengal, are still stranded across the district, mainly in the Sangla Valley and Pooh.

The IAF could not conduct sorties yesterday, owing to non-availability of aviation fuel in Shimla, an official said.

Incessant rainfall in the region over the past few days triggered massive landslides that blocked most of the roads in the remote district.

Superintendent of Police G. Shiva Kumar, based in Rekong Peo, said 14 people have been killed, including five members of a family, in landslide and rain-related incidents in the district since Sunday.

“The road clearing operation is on. But still, it would take more than a week to reopen all major roads,” he said.

The Hindustan-Tibet Road leading to the China border along Kinnaur is blocked at several locations, officials said.