Heer-Ranjha’s classic pair, epitomizes love, and is considered as an iconic symbol of devotion. The latest flick spins the same magic at audience, but here, the ‘Dhanush-Baan’ pair (Sonam is strikingly lean as an arrow) romanticizes socialism too on the pastoral bylanes of Delhi — when the backdrop of Banaras starts appearing too monotonous to carry the swing frontward.

The typical Hindu-Muslim cultural carve-up, slitted-wrists, Bhatta-Parsol incident, Jawaharlal Nehru University’s (JNU’s) lessons on socialism, student politics, and an intransigent guy, son of a Tamil Brahmin priest , who banks more on optimism than expediency – in wait of Cupid striking her childhood-crush with an arrow entrenched in his heart’s blood — characterize the latest Friday release. 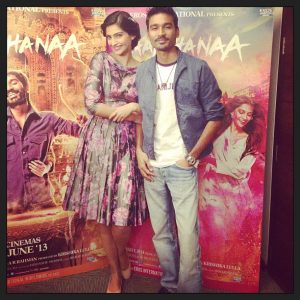 Produced by Krishika Lulla under the banner of Eros International, Raanjhanaa is directed by Anand L Rai (from Tanu weds Manu).The dubbed version (in Tamil) of the same movie named Ambikapathy is scheduled to hit theatre screens, a week afterward.

The flick primarily revolves around two characters – Kundan (Dhanush .K. Raja) – whose forefathers (temple priests) had settled in Banaras long back and Zoya (Sonam Kapoor). The childhood love birds separate-off only to meet after ten long years. Zoya’s father (a professor in local college) forces her to dump her aficionado and packs her off to Aligarh.

In the meantime, the guy who had won over Zoya’s heart only after stalking her incessantly on his bicycle and getting his ‘dusky’ cheeks reddened from her sixteen crackling slaps decides to linger for her return.

The screenplay (by Himanshu Sharma) takes a leap and Kundan discovers that she loves Akram alias Jasjit Singh Shergill (Abhay Deol), a youth leader from the ALL India Citizens Party (AICP), in the JNU.

Furthermore, her incessant requests to Kundan in order to facilitate their marriage, jilts him utterly, but he obliges analogous to all the ‘goody-goody’ Bollywood heroes, only to ascertain on the wedding day that Akram isn’t a Muslim — nor is he a Hindu (but a Sikh Jat) as wrongly described in the movie. What follows is a scornful mayhem created by Kundan in Zoya’s life to simmer down his frenzy, only to put his life at a stake to undo his misdemeanor — this ends at the realms of the JNU.

The film is crafted around various twists and turns but chinks have made their way in, and this happens if too many stories are embedded in a single screenplay. A movie (in fact two-in-one) surprises audience with sudden infusion of socialistic politics, which ends up only as an irritant only.

Dhanush, the national award winner, Tamil actor has held the show with his street smart (literally) gripping performance. Despite his inclusive acting skills, he needs to gear up with more Hindi/ Urdu lessons, if he wishes an extended stay in Bollywood, unlike his father-in-law, the legendary Rajnikant. Although, he lacks trademark chocolatey looks for a romantic hero in Bollywood, his ease with humor and emotions is laudable.

Sonam has delivered delightfully in different shades — from chuckles to grey.

Mohammad Zeeshan Ayub (Murari) is Dhanush’s ‘langottiya yaar’ who sports a ‘choottiya’ that is very disparate from what pundits in Banaras fashion —- a big flaw in his appearance. Although, his straightforward-witty lines don’t let dullness tiptoe into the movie. Swara Bhaskar as Bindidya is very composed and performs well in her limited avatar.

A.R. Rahman’s soundtrack is credit worthy but, typical Rahman is missing. Lyrics by Irshad Kamil fit the songs well, although, most of the words made to appear more like Gulzar’s riddles.

But those who can’t absorb gloomy love tales must restrain themselves from watching the movie.

*Raanjhanaa gets 3 stars on the scale of 5 from Hillpost.