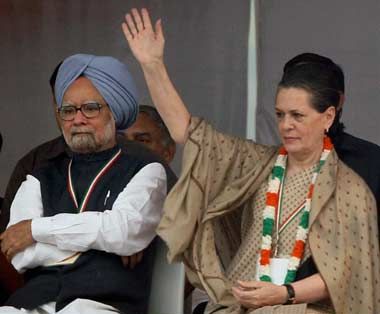 On the eve of the visit, a deadly guerrilla attack at Hyderpora on the Jammu-Srinagar-Muzzafarabad Highway left eight army soldiers dead, and 13 others wounded, causing heightened tension.

Authorities imposed restrictions in old city areas of Srinagar and many uptown areas today, without making any official announcements about the restrictions.

Pedestrian and vehicular movement was disallowed in the old city while similar restrictions were in force at some other areas as well.

Shops, other businesses, educational institutions were shut and public transport remained suspended in the city today, where extraordinary security arrangements were made ahead of the visit of the prime minister and the Congress chief.

A shutdown called by the separatist leaders coincides with the prime minister’s visit.

A three-vehicle army convoy on its way to north Kashmir Baramulla town was ambushed, reportedly by two ‘pheran’ (local over-garment)-clad guerrillas, who attacked one of the vehicles in the convoy with automatic weapons and grenades.

The Hyderpora ambush was the second deadly attack in just three days. On Saturday, two local policemen were killed in a hit-and-run attack by guerrillas in the busy Hari Singh High Street market adjacent to city centre Lal Chowk.

The Hizbul Mujahideen has owned responsibility for both these attacks.

The prime minister and the Congress president are set to arrive in teh Kashmir Valley later today. The prime minister will release a commemorative postage stamp to honour the 20th century Kashmiri poet, Mehjoor.

In the evening, the prime minister and the Congress president will co-chair a meeting of the state cabinet with Chief Minister Omar Abdullah to review the implementation of the prime minister’s ambitious Rs.37,000-crore reconstruction package for the state.

The prime minister will also inaugurate the 10.86-km-long railway tunnel across the Pir Panjal mountain that would connect the landlocked Kashmir Valley with Banihal town of the Jammu region.

Built at a cost of Rs.1,300 crore, the tunnel besides providing a rail link between the two regions of the state would also reduce the distance between Qazigund town in south Kashmir Anantnag district and Banihal town by 17 km.

It would be an all-weather surface link. The 300-km Srinagar-Jammu national highway often gets blocked in winter with heavy snowfall.