Chandigarh: With JD-U severing its 17-year-old ties with NDA today, Punjab Chief Minister Parkash Singh Badal said a new polarization of political parties would take place after the 2014 general elections for constituting the next NDA government at the centre. 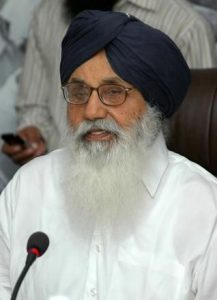 Interacting with media at Khatti village near Phagwara, 120 km from here, Badal termed the appointment of Gujarat Chief Minister Narendra Modi as the head of the campaign committee of the Bharatiya Janata Party (BJP) an internal matter of the party.

Asked to comment on the rift between Janata Dal-United (JD-U) and the BJP and its implications on the prospects of the National Democratic Alliance (NDA), Badal said Bihar Chief Minister Nitish Kumar was a “very wise politician and was at liberty to express his opinion freely”.

He said his party was firmly with the BJP.

“The Shiromani Akali Dal is committed to support the BJP in every situation,” he said categorically.

The BJP, which leads the NDA, and its precursors have been in alliance with the Akali Dal for over 45 years. The parties run an alliance government in Punjab.

“Neither the BJP nor the SAD has ever interfered in each other’s internal matter, which has further cemented the alliance between both the parties,” Badal contended.

He said an anti-Congress wave was prevailing across the country as people were fed up of its anti-people policies, rampant corruption and exorbitant price rise.