Srinagar: As South African anti-apartheid icon and former president Nelson Mandela, 94, battles a recurrent respiratory problem in a hospital in his country, and as his condition was described critical over the weekend, there was much concern in distant Kashmir.

Mandela has always been seen as an iconic leader in troubled Kashmir, where the people’s experiences with most of their own leaders have not been gratifying. 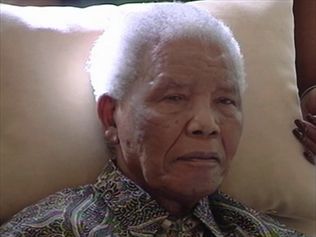 When militancy started in Kashmir in the 1990s, separatist leaders would often quote Nelson Mandela and the sacrifices he made for the democratic rights of his people. His fight against apartheid and for the right of self-governance were often cited in the troubled Kashmir Valley.

Interestingly, when senior separatist leader Shabir Shah, who spent over 15 years in various jails of the state, was freed in the mid-1990s, people welcomed him, calling him the “Nelson Mandela of Kashmir”.

Many supporters of the ruling National Conference (NC) argue that the founder of the party, late Sheikh Muhammad Abdullah, actually fits the bill and could be called the “Nelson Mandela of Kashmir”, given his leadership qualities and mass following.

So, whether one sees Nelson Mandela through the eyes of a separatist or a supporter of the mainstream in Kashmir, Mandela is a hero.

The news about his deteriorating health is a matter of concern and discussion in Kashmir, whether one is educated or not. “I heard on the radio that Nelson Mandela is very ill. He has been a great leader of his people,” said Gulam Muhammad Magrey, 45, a north Kashmir farmer, who struggled to pronounce Mandela’s name right.

Senior separatist leader Muhammad Nayeem Khan told in Srinagar: “Nelson Mandela has always been a symbol of resistance against apartheid and injustice, an iconic leader who stood for the rights of his people. That is why he has been an inspiration for Kashmiris and continues to be respected and loved.”

Younger Kashmiris too have great affection for the South African leader.

“He has always been someone we contrast with our leaders, when it comes to unflinching commitment to the cause of the people. He stood like a rock, as he believed the truth should never be compromised,” Maajid Ganai, 24, an unemployed youth, said.

“He was no ordinary leader, and it is not just a matter of leadership. Leaders don’t exist if people do not stand steadfast behind them. Today, we do not have a single local leader who can be called an undisputed leader of the masses,” said Ali Muhammad Dar, 62, a resident of central Badgam district here.

“Late Sheikh Abdullah once ruled the hearts and minds of the people, but what did the people do for the Sheikh when he was put behind bars for long years? Leaders are produced from among the people, the people get what they deserve,” Dar said.