Chandigarh: Punjab Chief Minister Parkash Singh Badal today hailed the elevation of Gujarat Chief Minister Narendra Modi as the chairman of the BJP election campaign committee for the 2014 Lok Sabha election as “a master-stroke and a knockout punch” against the UPA government and the Congress party. 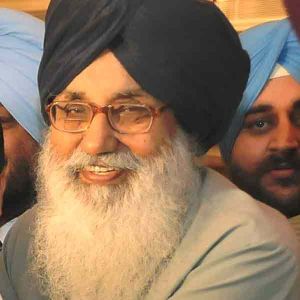 Welcoming Modi’s new role, Badal, who arrived in Mumbai today on a four-day visit, said: “This has already sent shock-waves in the UPA and completely demoralized it, as is borne out by the nervous reactions of their leaders.”

Badal said that the political climate in the country clearly pointed towards a strong anti-Congress and anti-UPA (United Progressive Alliance) wave.

Badal, who spoke to Modi on telephone and even called up Bharatiya Janata Party’s (BJP) president Rajnath Singh, said that Modi’s experience will help the BJP and its allies.

“You have assumed charge at a time when the country is looking to deliver the clinching blow to the scam-tainted and already staggering UPA-led by the Congress party,” he said while congratulating Modi.

“Mr. Modi’s stature as a mass-leader with a stronghold over the grass-root politics, and his long record and reputation as an outstandingly capable administrator would be more than an effective counter to the inept, corruption-laden and confused UPA government at the centre. His clarity of ideas on development and governance and his highly impressive record as a mass-mobiliser and crowd-puller are great assets for the BJP and allies,” Badal said in a statement here.