Srinagar: Prime Minister Manmohan Singh has announced Rs.710-crore financial aid to Jammu and Kashmir to help it acquire land for the rural roads scheme, making it the first state in the country to get such assistance.

The prime minister made the announcement after co-chairing a state cabinet meeting at the Sher-e-Kashmir convention complex on the edge of the Dal Lake here yesterday evening. 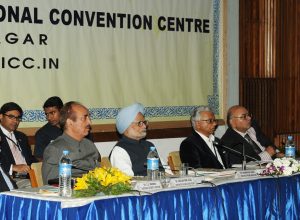 So far, there has been no provision under the centre’s Pradhan Mantri Grameen Sadak Yojna (PMGSY) for offering assistance to any state to acquire land for improving rural roads.

The country-wide PMGSY programme has been facing hurdles in Jammu and Kashmir because of land acquisition problems. People in villages have been refusing to part with their ancestral lands without payment at prevalent land rates to them as compensation.

Of around 10,000 km of road length covered under the PMGSY, road building work had to be suspended for 2,000 km because of land acquisition problems, an official said.

Sources in the state cabinet said the prime minister asked the state government to improve its financial base to meet future challenges.

The prime minister, they said, told the state cabinet that the centre had been bending rules to provide financial assistance to Jammu and Kashmir, but the state would have to arrange its own finances in future.