“I am not quite physically fit, but I was determined not to miss this opportunity,” Negi told reporters in Kalpa, some 275 km from the state capital, soon after casting his vote. 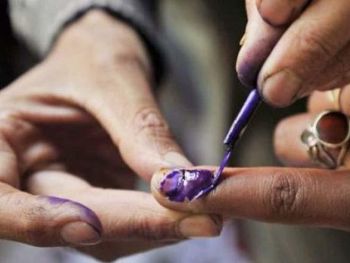 Kinnaur is part of the Mandi Lok Sabha constituency, where polling was put off as torrential rains June 16-18 caused the area to be cut off from the rest of the state.

“What was the need to conduct polling at a time when the entire area was hit by a natural calamity,” Negi, who had also voted in the country’s first general elections in October 1951, said.

Negi retired from a government primary school in 1975. In 1951, Negi had voted from the Chini constituency, which was later renamed Kinnaur.

At that time, elections in snow-bound areas were held ahead of other places in the state and the country.

He never missed an opportunity in all these years to exercise his franchise — be it general or assembly elections, Negi’s family members said.

“This time, my great grandson is accompanying me,” said Negi, whose ripe age has rendered him partially blind and hard of hearing.

In 2010, then chief election commissioner Navin Chawla had visited Negi’s village to honour him as part of the Election Commission’s diamond jubilee celebrations.

The state election department has a video recording of Negi casting his vote in the 2007 assembly elections.

Polling in 16 segments of the Mandi constituency was held on June 23.

The counting of votes will be held June 30 for the entire constituency.

The by-election was necessitated after Chief Minister Virbhadra Singh relinquished his Lok Sabha seat on being elected to the assembly in December 2012.

The Mandi constituency, which includes Kullu, Mandi and some areas of Chamba and Shimla districts, besides the tribal-dominated Kinnaur and Lahaul and Spiti, is one of the biggest in the country.