Shimla: Wholesale markets in Himachal Pradesh are flooded with a pricey wild, rare nutritional fungi crop known for its medicinal value. Guchhi, or morchella esculenta, a mushroom variety which commands a huge demand globally, is plentiful this year. 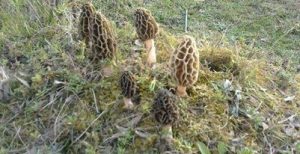 Its production has been bountiful after a long gap, owing to heavy snow last winter in the mid hills where it grows naturally. The snow, followed by hail and thundershowers, made conditions ideal for this crop, experts say.

Guchhi, found in deodar groves at an altitude above 7,000 feet, mainly in Shimla, Chamba, Kullu and Mandi districts, is selling from Rs.12,000 to Rs.14,000 a kg depending on the size and quality, say traders in Shimla.

“Seeing the arriving trend of guchhi in the market, its production is three times more than previous years. Even the prices are at a significant high despite the plentiful supply,” trader Karamjit Singh told.

He said much of the crop was headed to Chandigarh, Amritsar and Delhi.

“In the US and European markets, it sells like hot cakes. Most traders in Delhi are exporting it,” Karamjit Singh said.

According to botanists, morchella esculenta is an important mushroom belonging to the Helvellaceae family. It is commonly called sponge mushroom.

It normally grows on logs of decaying wood, decaying leaves or humus soil in clusters.

Villagers start collecting the mushrooms in March. The gathering continues till May-end. It is dried before being sold.

“This year the guchhi crop is good. Normally we collect 50 to 60 kg ‘guchhi’ every year from Chaupal forests (in Shimla district). But so far, we have collected over 100 kg,” said Ram Singh, a villager.

He said most farmers in the area have a good collection of the valuable mushrooms.

“A number of traders from Chandigarh and Delhi have been camping here to procure it directly from the villagers,” he said.

Locals thank the plentiful snow this past winter, the subsequent lightning and thunderstorms in March and April, and the forest floor rich in humus for the plentiful crop.

Officials of the forest department say families settled in forested areas are actively involved in the collection of guchhi from April to May, and earn handsome rewards for their efforts.

“A collector spends 10-12 hours a day to collect guchhi. On an average, one can collect up to 200 gm of guchhi, which is reduced to almost half that weight on drying,” an official said.

Villagers have permission to collect guchhi, which falls under the category of “minor forest produce”.

“The local panchayat is charging a fee of Rs.10,000 per quintal for selling guchhi in the market. But a major chunk of the produce reaches the market clandestinely,” an official said.

Villagers ought not to pluck out the roots, as the crop is then destroyed. But many villagers unknowingly pluck the clusters out with their roots, an official said.

“In the absence of organised trade, poor villagers are also often left cheated by middlemen who make huge profits on this delicacy,” said a forest official.

Himachal Pradesh is known for growing a variety of wild spices and medicinal plants. Hundreds of families earn their livelihood by collecting and selling these.