Shimla: The Himachal Pradesh government is on monkey business, literally! The wildlife wing will chase marauding monkeys in the streets – not to shoo them away, but to conduct an exact headcount.

A dawn-to-dusk census of monkeys and langurs, involving over 2,500 people, would be conducted June 29, Principal Chief Conservator of Wildlife A.K. Gulati told. 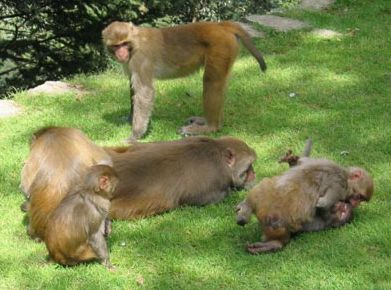 This would help in drawing up a roadmap to tackle the menace scientifically, he said.

“With this (census) we will be able to identify the hotspots where the menace is more acute,” he added.

Wildlife officials said various programmes launched in the past, including permission to shoot the monkeys in the fields that has been stayed by the Himachal Pradesh High Court, had failed to tackle the increasing population of simians.

Thousands of farmers in Shimla, Solan, Sirmaur, Bilaspur, Hamirpur, Una, Mandi and Kangra districts have incurred losses mainly due to the marauding monkeys.

The wildlife wing estimates that more than 900,000 farmers are affected by wild animals in the state. Monkeys, numbering over 300,000, mainly target cereal and fruit crops, causing extensive damage.

Gulati said the high court had in January 2011 put on hold the state’s decision to allow the farmers to shoot monkeys that have been destroying their crops and fruits.

“The case is still pending in the high court. We are working on a monkey rehabilitation project on the court’s directions.”

A division bench consisting of then Chief Justice Kurian Joseph and Justice V.K. Sharma had directed the chief wildlife warden to experiment with the use of air-guns, air-pistols and air-rifles to shoo away the monkeys.

It had also suggested barbed fencing, fire-belts, use of crackers and trained dogs and obtaining funds for primate protection parks, relocation, sterilisation and protection parks.

Gulati said the government is currently carrying out a mass sterilisation programme.

“We have launched a monkey sterilisation programme at four centres. Three more centres will soon become functional,” he said.

The sterilisation technique, he said, has been adopted the world over for various wild and domestic species.

The government last year announced it would sterilise 200,000 monkeys, but it missed the target by a huge margin due to a financial crunch, wildlife officials said.

A whopping Rs. 35 crore to Rs. 40 crore was required for meeting the target, the official added.

“But we have managed to sterilised over 68,000 monkeys,” Gulati said.

Earlier, the wildlife wing had carried out mass translocation of monkeys from Shimla and other towns to forests.

But this experiment was not successful as the territory vacated by the translocated animals was soon occupied by monkeys from the surrounding areas.

The Kheti Bachao Sangharsh Samiti, an NGO working for the cause of farmers in the state, has been demanding that the ban on export of monkeys be lifted as this was the only way to check their rising numbers.