Shimla: Differing with the Virbhadra Singh led Congress government; a senior member of the party has cautioned the government by taking lesson from the disaster in Uttarakhand and parts of the state and asked for a re-think about the policy on promoting cement and hydro industry. 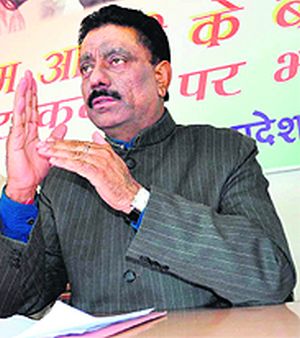 Congress general secretary of the state unit Kuldeep Singh Rathore let reporters know that he had written to party president Sonia Gandhi to review the existing model of development for the Himalayan region to prevent such tragic disasters.

A stringent policy to protect the Himalayan environment should be framed and the entire development projects should conform to it, he said.

Asking for only permitting environmentally sustainable projects in the Himalayan belt, Rathore pointed out that there were over 1100 projects in various stages of construction in Himachal Pradesh and Uttarakhand.

When quizzed about the Congress government after assuming power in January had turned around to promote large cement plants and housing projects, the congressman who is also an AICC member said that the state government needed to re-think about its priorities.

Terming the Rs 28 Cr released by state government for the disaster zone in Kinnaur district that bore the brunt of heavy rain damage along with Uttarakhand disaster, he said the center had been approached and more funds needed to be made available to deal with the calamity.