Shimla: Most of the areas in Himachal Pradesh continued to experience moderate to heavy rainfall today, with Shimla experiencing 41 mm rain. Officials said more showers are in store in the state. 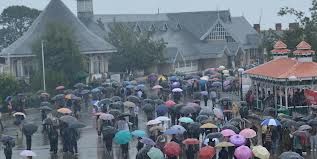 The weather bureau in Shimla said most of the areas, particularly Shimla, Solan, Kangra, Una, Sirmaur and Mandi districts, have been experiencing moderate to heavy rainfall.

Nagrota Suriyan in Kangra district received 90 mm of rain Since Thursday, the highest in the state.

Met office director Manmohan Singh told there are chances of heavy rainfall at some places in the state tomorrow too.

Meanwhile, widespread rain lowered the maximum temperatures by two to three notches and the minimum by one to two degrees.

Shimla, popular among the tourists as the Queen of Hills, recorded a high of 23.4 degrees Celsius.