Rampur (Himachal Pradesh): “It’s now a death trap.” So said a Doordarshan journalist rescued today after having been stranded for four days in a landslide-hit part of Himachal Pradesh.

“There is no water and electricity. The entire communication has been snapped since Sunday,” Doordarshan’s news editor Nandini Mital told here after arriving from Pooh, 320 km from here, by an IAF chopper. 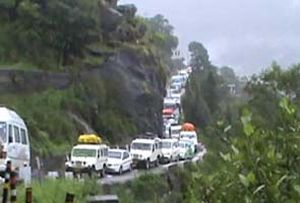 Mital was rescued by the Indian Air Force along with two colleagues and a few tourists. Rampur is the base camp for rescue operation.

She complained that no relief and rescue team from the state government or the National Disaster Management Authority had reached Pooh.

Like her, 50-odd tourists mainly from Punjab and Chandigarh were stuck there.

Mital said: “There was no government functionary to assist the stranded people. The locals were benevolent. They provided food and shelter to us. There was no air dropping of essential items. The ration with the locals will last only five or six days.”

Mital’s team was on an official assignment when they were caught in torrential rains near Khab, the cold desert close to the China border.

According to her, the national highway 22 which passes through Pooh was severally damaged at several locations due to landslips and rains.

She said she and the others were told to reach Pooh from Khab to board the helicopter.

“After leaving behind our vehicle, we reached Pooh on foot by covering over 15 km. In Pooh there was no government official to guide us. Finally, we took the help of an army unit,” she said.

She said the entire stretch of the highway between Khab and Pooh had been wiped out.

“Even the entire standing crops of peas and wheat has been damaged due to untimely snow.

“The Border Roads Organisation (BRO) officials told us that it would take a month and a half to restore normal traffic on the Hindustan-Tibet Road,” Mital said.

Chief Minister Virbhadra Singh, also stranded in Sangla for over 60 hours, was airlifted on Tuesday.

Legislator Jagat Singh Negi said the maximum damage to property – both government and private – in the district was reported from Pooh block due to snow.

He said in certain areas most roads and bridges have been wiped out.

Officials said 14 people have been killed, including five members of a family, in landslide and rain-related incidents in the district since Sunday.