Kullu: The Himachal Pradesh government today imposed a ban on river rafting here due to the sudden increase in water level in the Beas river, an official said here. 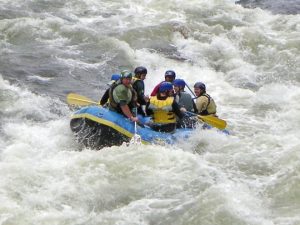 “The water level in the Beas has increased due to incessant rains in the region in the past two days. Keeping in view strong current, we have imposed a ban on river rafting till further orders,” sub divisional magistrate Vinay Dhiman told.

He said a decision in this regard was taken after a technical committee for the river rafting inspected the river.

Officials said normally the ban on rafting imposes in July with the onset of monsoon. But this time, the water level has increased even with the pre-monsoon showers.

Two women tourists have lost their lives while doing river rafting in the Kullu area this season, said the police.

More than 100 travel agents are based here for conducting rafting for the tourists.

Thousands of tourists, mainly from the north Indian plains, descend on Kullu from May to July for rafting.