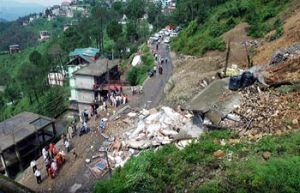 “Rescue work by the locals has begun but the government officials are yet to reach the spot owing to massive landslides,” Superintendent of Police G. Shiva told over phone.

He said the family was sleeping in their house at Chagaon village near Tapri, some 220 km from state capital Shimla, when the incident occurred.

“The chances of survival of the victims is bleak,” he added.

The entire Kinnaur district has been experiencing heavy rain for the past two days.

He said work is on to resume link roads in the district and the picturesque Sangla Valley has been cut off due to landslides and a large number of tourists are stranded.

Chief Minister Virbhadra Singh and over 1,000 tourists were stuck in the picturesque Sangla Valley as the area was cut off due to landslides, an official said.

Incessant rainfall in the region has triggered massive landslides that blocked the road leading to the valley in Kinnaur district.

“Work is on to reopen road link to the Sangla Valley and other major roads. Over 1,000 tourists are also stranded across the district, mainly in Sangla area,” said Deputy Commissioner J.M. Pathania.

He said high alert has been declared as more than 60 percent of the district was badly hit by heavy rain. Some areas in Pooh experienced snow.

The chief minister, who was on election tour for the Mandi parliamentary by-poll slated for June 23, has been stationed at Sangla village, some 275 km from state capital.

The Hindustan-Tibet road leading to the China border along Kinnaur is blocked at several locations, said officials.