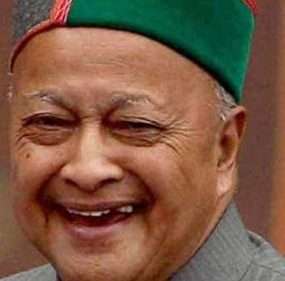 After six months of lull, a political storm is again raging in the state ahead of the June 23 Mandi Lok Sabha bypoll. The main political parties see it fit to engage in a verbal spat ahead of the battle of the ballot.

“Dhumal functioned like a Hitler in his five-year term and deprived the people of their basic rights,” the 78-year-old Virbhadra Singh said at a recent public rally in Kullu district, from where he hopes to get his wife, Pratibha Singh, elected to the Lok Sabha. This is the seat he vacated before taking charge as chief minister.

Attempting to pull the emotional strings of the voters, Virbhadra Singh asked them to “give me a gift on my 79th birthday (June 23, polling day) by voting for my wife”.

“At this age, Virbhadra Singh requires his wife at home,” Shanta Kumar said at a rally in Mandi town June 1, the day the BJP candidate and four-time legislator Jai Ram Thakur filed his nomination papers.

Firing pot-shots at Virbhadra Singh, two-time chief minister Dhumal has been questioning the 15,000 transfers of officials on political grounds and the renaming of public schemes in the five months that the chief minister has been in office.

Political observers say issues like development and price rise have been pushed to the background as personal attacks dominate most of the election rallies.

“Apart from mudslinging, there is no public-specific agenda with both the parties. They are just trying to woo voters by raking up personal issues,” an observer said.

At the same time, the coming together of rivals within the two parties is the one good thing this byelection has wrought, observers say.

At the launch of the BJP’s election campaign in Mandi, rivals Dhumal and Shanta Kumar shared the public stage for the first time after the party’s defeat in the assembly poll in December 2012. Both the leaders had earlier blamed each other for the BJP’s humiliating defeat.

Likewise, the Congress too has been trying to present a united face.

At its rallies, Transport Minister G.S. Bali, who had earlier expressed resentment over the portfolio allocated to him, shared the dais and campaigned with Virbhadra Singh.

“The credit for the telecom revolution in Himachal Pradesh and country goes to Sukh Ram,” Virbhadra Singh said, adding that the previous BJP regime “misused the technology by unauthorised surveillance of telephones of Congress leaders”.

Sukh Ram had, in the 2009 general elections, refused to campaign for Virbhadra Singh, who was contesting from Mandi.

The votes cast in the June 23 bypoll would be counted June 27.