Shimla: The Himachal Pradesh High Court took the state to task for misuse of Chintpurni Temple funds used for purchasing of vehicles for officers and for drawing upon temple funds to lay the sewerage lines of Una town.

For failing to draw a line between temple and state funds, the court took the  deputy commissioner of Una and temple officer Chintpurni Temple Trust to task for misusing vehicles purchased from temple funds for their personal or official needs. 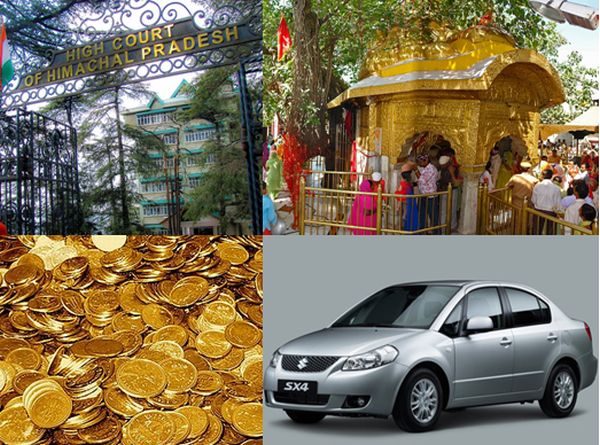 Taking a stern view about the vehicles purchased from temple funds and one (Tata Sumo) being used by one Subhash Chand, who is the temple officer while two others (Maruti SX4 and a Gypsy) attached with commissioner temple who happens to be the district commissioner, Justice Rajiv Sharma on Tuesday decreed that the said vehicles be surrendered to the temple trust that very day.

Passing orders in civil writ petition Vinod Kumar Kalia vs State (CWP 4679/2011) the judge directed that the vehicles be placed at the disposal of the temple management committee and restrained the officers from using them.

“No vehicle except ambulance or fire tenders shall be purchased from the temple funds, till further orders,” the judge ordered.

“Temple funds are strictly to be used for providing better facilities for the temple,” the judge observed.

The judge noted that the court in its earlier orders passed on 12.3.2012 and 19.3.2012 had directed for providing toilets at least at 5 places but till date no toilet had been constructed, and only 10 marla of land had been bought for the purpose.

“Thousands of people visit the shrine, more particularly, during Navratras. It is the duty of the management of the temple to get constructed suitable number of toilets to be used by the devotees,” observed the judge.

“The State cannot be oblivious to the Land Acquisition Act. If the authorities have the will, they can get the land by way of acquisition for the construction of toilets,” he added.

Noting the laxity in failing to create public infrastructure for pilgrims visiting what is one of the richest shrines in Himachal Pradesh and misuse of temple funds, the judge observed, “There is a misconception in the minds of the State that the temples/shrines mentioned in Schedule-I have been taken over. In fact, the enactment is only for managing the affairs of the shrines.

These funds are only to be utilized for providing better facilities and for the up keep of the temple. The temple funds cannot be diverted and permitted to be used for any other purpose. Under the garb of management, the temple and its affairs cannot be run like Governmental office, the judge recorded.

The court also restrained the state from drawing temple funds for laying of sewerage lines for Una town. The plan presented before court showed that Rs 8.5 lakhs was to be drawn from the temple funds for the towns sewerage scheme.

There should not be any close proximity and intrusion directly or indirectly by the State in the religious freedom of persons. The State and religion are to be kept separate and entanglement between Government and religion is to be avoided, the judge observed.