Dehra Dun : Chief minister Vijay Bahuguna recently admitted that it is not corruption and inefficiency alone, but a lot is required of the government machinery so that some benefits can percolate down to the masses and there can be some semblance of governance and development in Uttarakhand. 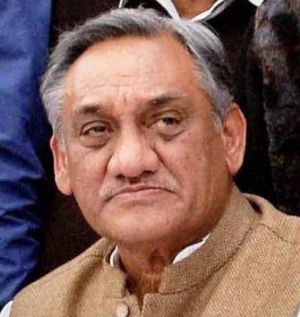 The speaker of Uttarakhand vidhan sabha, Govind Singh Kunjwal who had in the recent past come out heavily against his own party government, threw another bombshell, which should make not only the chief minister and his cabinet colleagues, but the bureaucracy in this small mountain state hand down its head in shame.

With out mincing words he said that corruption in the state had surpassed all limits and crossed that prevalent in Uttar Pradesh (perhaps things have improved in Bihar after Nitish Kumar took over). “No work is done without money changing hands, even a post mortem is not conducted unless palms are greased”, he said in a shocker.

In what should make even the Congress high command take note of the sad state of affairs prevailing in the state, the Speaker said that things had reached to point where even some of the party MLAs were thinking of resigning from the vidhan sabha, rather than face the wrath of the people because of the prevailing conditions.

He revealed that a patient did not have money to bribe the hospital staff because of which he medicines were not dispensed to him and he died. What can be more frustrating to the elected representatives than the fact that the major portion of funds meant for development projects are shown spent only on paper and nothing materializes at the ground level, he alleged.

Asserting that a survey in The Economic Times had revealed the rampant corruption prevailing in Uttarakhand and the fact that it was more deeply rooted than in Uttar Pradesh, the Speaker said that it is time that the state government should take note of the prevailing sad state of affairs, because many MLAs were also antagonised with the prevailing situation.

And to give credence to what Kunjwal said, two Congress MLAs, Harush Dhami who represents the Dharchula assembly segment and Hemesh Kharkwal, who represents the Champawat assembly seat have accused the state government of neglecting their constituencies in development works and ignoring them, adding that the serious matter will be taken up before the party high command.

Even as some of the party bigwigs in the state who are hand-in-glove in the politician-bureaucrat-mafia nexus and not uttering a word against the rampant corruption have been taken aback at the front opened against the government by their own party MLAs, they are now trying to tackle the situation by resorting to a damage control exercise.

Realising that the frustration amongst the party legislators could snowball and becoming a raging forest fire spreading with the anger of discontent against the government in general and chief minister Vijay Bahuguna in particular, they are asking the members of the Congress legislature party not to voice their anger in the public, but come out with their resentments only at party forum.

In fact Dhami has already given a notice that if the develolments works as desired by him are not undertaken in his assembly segment within 15 days, he will resign as MLA, adding that there were other party MLAs, who are equally frustrated at the neglect of their constituencies and could also follow suit, waiting for him to take the lead.

Hemesh Kharkwal said that the manner in which Dhami had been sidelined by the state government and Congress party here showed the disrespect for a MLA, adding that a meeting of the Congress legislature party should be called immediately so that the legislators can voice their concern and resentment before the chief minister.