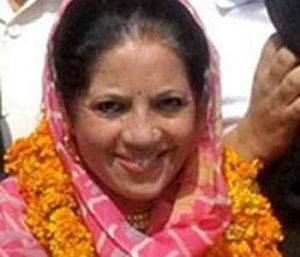 Earlier, this seat in the Lok Sabha was represented by Pratibha Singh’s husband and six-time Chief Minister Virbhadra Singh, who resigned following his election to the state assembly in December 2012.

Of the 582,249 votes polled, Pratibha Singh got 353,492 votes whereas Thakur got 216,768 votes, Chief Electoral Officer Narender Chauhan said in a statement.

The main contest was between the Congress and the BJP.

Poll officials said the Congress candidate secured a lead in 16 of the 17 assembly segments of the Mandi parliamentary constituency, the Congress’ pocketborough.

In the Seraj assembly constituency in Mandi district, Thakur – who is known for his clean image – took the lead.

Second-time MP Pratibha Singh got the highest lead of 24,099 votes from the Rampur assembly seat, the stronghold of Virbhadra Singh, followed by Bharmour from where she attained lead of 16,117 votes.

In a statement from Delhi, Virbhadra Singh said: “I want to thank all the voters for the landslide victory of the Congress.”

He said the victory confirms that people have expressed faith and confidence in the programmes and policies of his government.

Expressing gratitude to voters of rain-ravaged Kinnaur district, the chief minister said: “I specially thank the voters of Kinnaur who overwhelmingly participated even after the natural calamity hit the region.”

He assured them that the government would reciprocate with the same spirit by ensuring speedy development works and undertaking massive relief and rehabilitation works.

Pratibha Singh was elected to the Lok Sabha from this seat earlier in 2004 after she defeated the BJP’s Maheshwar Singh by 66,566 votes in 2004.

Virbhadra Singh won the Mandi seat in 2009 by a slender margin of over 13,000 votes by defeating Maheshwar Singh. At that time, the BJP was ruling the state.

“It is a victory of the programmes and policies of the Congress governments,” Industries Minister Mukesh Agnihotri told.

The Mandi parliamentary constituency – which includes Kullu, Mandi and some areas of Chamba and Shimla districts, besides the tribal-dominated Kinnaur and Lahaul and Spiti – is one of the biggest in the country.