Dehradun : Even as the residents of the villages in and around the Kedarnath shrine one of the holiest Hindu temples at a height of 3584 metres and a popular destination for Hindu pilgrims from all over the world are against the helicopter ferry being provided by private operators, vested interests are batting for the chopper services. 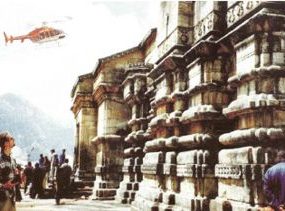 Residents of the Kedarnath valley are so cheesed off at the helicopter services that they have undergone an a relay hunger strike near the helipad from where the pilgrims are airlifted in the helicopters. Their main grouse is that the loud noise and high velocity winds generated by the choppers specially during take off and landing are disturbing the wildlife in the sanctuary.

It may be mentioned here that though pilgrims have been thronging the Kedarnath shrine for years now, no government either when the region was a part of Uttar Pradesh, or now when it is in Uttarakhand, has given a thought of linking the shrine with a road which would not only facilitate pilgrims from visiting the temple but also increase the earnings of the shrine.

As of now the pilgrims have to undertake a stiff trek of about 14 kms from Gaurikund yo reach the shrine. While the women folk and aged and infirm generally rely on palanquins for making it to the shrine, the younger lot also has to fall back upon the mules that carry them. Though the mules are said to be steady of foot, yet the bridle path and steep fall on one side can be unnerving.

It was probably with this in mind and also the fact that as people are falling back upon religion in today’s trying times, the number of pilgrims is increasing rapidly. As the more affluent are also now coming to Kedarnath, the chopper services were started mostly with this section of the pilgrims in mind. In fact, now there are people who arrive in chartered helicopters.

Local residents allege, and this has been confirmed by the forest officials, that the helicopter service providers have not taken the necessary clearances from the forest department for flying their choppers over the sanctuary area. They and the wild life authorities confirm that the loud noise and high velocity winds generated by the flying machines is disturbing the wildlife, which includes the rare musk deer and snow leopard.

However, the district authorities were of the view that the locals were using the wild life just as a pretext to have the government rethink on constructing a road to the shrine. “They feel that the only way the government will consider constructing an all weather road is if the chopper services are some how stopped and there is pressure on the state government”, they added.

They said that a road will also provided a much needed communication link to the villages that remain cut off during the winter months and also facilitate their transporting material to the villages. But then what the villagers seem to be asking is that is it wrong for them to want road connectivity and is it not the duty of the state government to look in this direction?