A large number of leaders of the right have made serious efforts to re-invent themselves, and also to push their party towards the centre on security issues.

While one such example from the Western world is David Cameron, if one were to look within Asia there are two clear examples; Shinzo Abe current Prime Minister of Japan, and leader of the Liberal Democratic Party and PML-N supremo Nawaz Sharif who has recently been re-elected as Prime Minister of Pakistan for a third tenure.

The former does take an aggressive stand vis-à-vis China, especially on the issue of Senkaku islands and so has he made it amply clear that there is no compromise as far as amending article 9 of the constitution is concerned.

Yet, his tirades against China have been considerably toned down from his last tenure  and Abe’s focus has been on reviving the Japanese economy. In comparison to his first term he is indeed a mellowed personality.

In neighbouring Pakistan, the pragmatic Mian Muhammad Nawaz Sharif, a religious conservative and pragmatic businessman, has shifted even more towards the centre.

Sharif who was initiated into politics by the Pakistan army and overthrown by General Pervez Musharraf in a coup in 1999 has not only spoken about sorting out the civil-military balance, improving ties with India but also made some serious efforts to reach out towards Pakistan’s beleaguered minorities – consisting of Christians, Hindus and Sikhs.

To be fair to Sharif, peace with India has always been high on his agenda, though in his electoral campaign and immediately after being sworn in he made some bold statements with regard to closer economic ties and enquiries into Kargil and the Mumbai attacks. 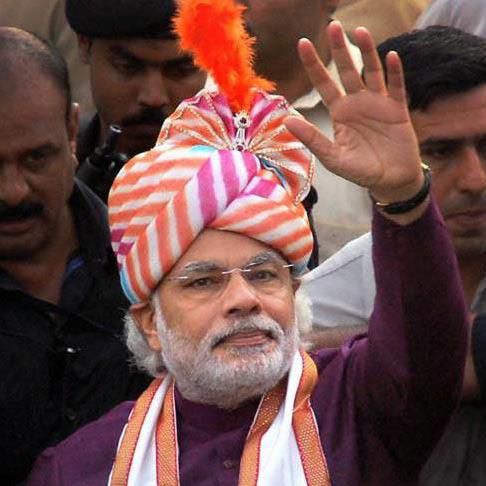 The businessman in him ensured that the focus of the campaign was  economic. While there is some ambiguity about his stand on hardliners and the Taliban, he has made it clear that serious efforts would be made to curb terrorism

If one were to look at India, one can not see the same urgency in the centre right BJP to make genuine efforts to move towards the centre — especially on security issues.

The party seems to be missing the charismatic Atal Bihari Vajpayee who expanded the party’s support base by reaching out to the minorities and  taking a bold stand on foreign policy issues.

While former Deputy PM, LK Advani has been trying hard to replicate Vajpayee, he has been a miserable failure.

The only leader with charisma and a mass base is the Gujarat CM and recently appointed Chairman of the BJP poll panel, Narendra Modi, who has shown some signs of change by focusing on development and repeatedly stating that the position of minorities in his state is much better.

Yet due to the taint of 2002 he is still anathema to certain allies while Advani, the key architect of Hindutva and Modi’s mentor turned bete noire is now acceptable.

Interestingly, when Vajpayee wanted to remove Modi, it was Advani who advised against doing so. Many believe that this cost the BJP the 2004 election and allies like the Telugu Desam Party (TDP).

It would be important to note, that the Gujarat CM has moved a long way since 2002 and managed to build his image outside his state, due to his oratorical skills and excellent governance record apart from making some overtures towards  minorities.

In fact, recent opinion polls show that the NDA would fare far better if Modi is projected as BJP’s prime ministerial face.

While there might be some merit in the point that the dismal performance by the Congress led UPA-2 may push a substantial section of young voters towards a Modi led BJP. There are certain steps which he needs to take to reach out to sections of the electorate — if not regional parties averse to his candidature.

The first being distancing himself from tainted individuals and making unequivocal efforts to reach out towards religious minorities and regions which have been neglected hitherto.

If one were to go by his remarks at the India Today Conclave in March, Modi is no longer a war monger. He has also been the most pro-active Chief Minister in pursuing economic diplomacy with other countries including China.

The BJP strongman has also advocated that the MEA have a separate wing for trade and commerce. Yet, the occasional jingoistic remark, such as criticizing the move to host the erstwhile Pakistani PM and serving him chicken biryani, leaves one a bit disappointed.

Modi baiters need to give him a chance to make amends, and also appreciate reconciliatory gestures and statements he makes, while Modi acolytes would do well to be more rational and realize that he has a long way to become acceptable, not simply dismiss any criticism of his shortcomings.

Ultimately, the future of the Indian right depends not only upon the performance of the BJP in the next elections, but also on how it re-invents itself. Narendra Modi’s actions in the next few months will to a large degree have an influence on all the above developments.