Shimla: A team of four students of Bishop Cotton School have successfully scaled the 19688ft (6,001 m) Mt Deo Tibba (Mountain of Gods) – a technical peak set back in the Manali valley. 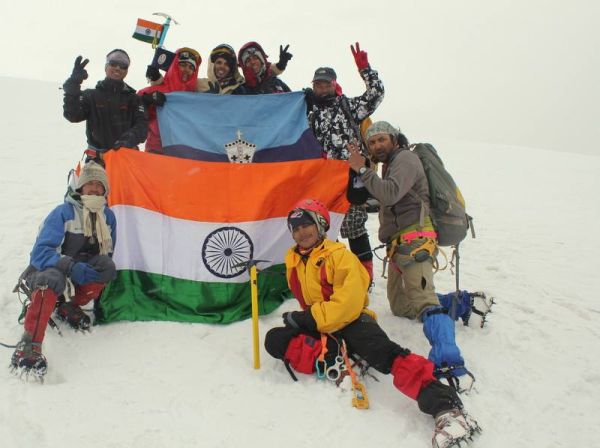 The expedition began on June 3, and ascend to the summit was carried out in the early morning hours of June 11. The weather was furious and unfavorable for climbing so the team, taking on the odds, had to ascend from the advance camp (set at 16000ft) to the summit i.e. a seven hour trek on 80 degree inclined ice walls, in one go.

Crossing over open crevasses and heading through snowstorms and temperatures as low as -20 degrees, the team reached the summit and unfurled the school flag and the tri-color at 9:15 am of the June 11.

Unfortunately, Shubham Hissaria felt altitude’s blunt at 18200feet and was forced to descend to the advance camp to seek medical aid.

Though, the height of the peak may not seem really challenging for a professional mountaineer, but the equipment, skill and stamina required for scaling the peak was no less than that required for any other higher peek in the Himalayas.

The team of students underwent a basic mountaineering course and training at the Atal Bihari Vajpayee Institute of Mountaineering and Allied Sports, Manali (ABVIMAS).

Mr.Rajiv Sharma, former deputy director of ABHVIMAS, Manali was the team’s technical adviser of the expedition, which was planned by Trek India Outdoor under the supervision of Mr. Naresh Kumar.

It is worth noting that recently a team of students from Lawrence School Sanawar set a new record as six of its members’ summitted the world’s highest peak – Mount Everest!