Chandigarh: A team of teenage boys from Lawrence School Sanawar has set a new record as six of its members summitted the world’s highest peak Mount Everest recently. 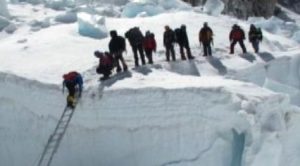 Raghav is the second youngest person in the world to have scaled the 8,848 metre (29,029 feet) Mount Everest.

Ajay Sohal, 16, from Himachal Pradesh, became the second youngest person in the country and the third youngest in the world to scale Mount Everest. Sohal was also part of the Lawrence School expedition.

The team comprised Juneja, Sohal, Guribadat Singh, Prithvi Singh, Shubham and Fateh Singh. Another member, Hakikat Singh, had to return from 27,000 feet due to problems with his oxygen cylinder.

All team members are between 15-17 years of age.

Flanked by their fathers and expedition leaders at a media interaction here Sunday, the young summitteers said they were thrilled to have accomplished the feat on the tough mountain.

“Each member created a record being in the list of top 10 youngest people in the world to climb Mt. Everest,” team leader Col. Neeraj Rana said.