New Delhi: The Board of Control for Cricket in India (BCCI) has called an emergency working committee meeting in Chennai tomorrow amid the ongoing crisis in the Indian cricket following the IPL spot fixing scandal, an official said. 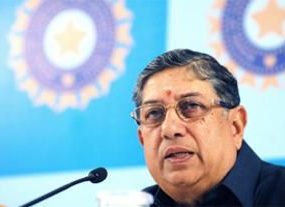 BCCI joint secretary Anurag Thakur today confirmed that the meeting will be held at 2.30 p.m.

“All the issues will be discussed during this meeting and I believe (it will be) by tomorrow 2.30 p.m., when the meeting starts. We have enough issues to be discussed,” said Thakur.

The pressure to resign is mounting on BCCI president N. Srinivasan, whose son-in-law Gurunath Meiyappan was arrested by Mumbai Police May 24 for his alleged involvement in the Indian Premier League (IPL) scandal.

Earlier Saturday, BCCI vice-president Niranjan Shah said the crisis was getting worse by the day.

“It is much regrettable and distressing that the situation is getting aggravated in increasingly disgraceful manner…The matter pertaining resignation of BCCI’s president Mr. Srinivasan should rather be a matter between himself and the rules and regulations of the board,” Shah said in a statement.