43 private and Indian Air Force helicopters are undertaking ferries to the higher reaches of Uttarkhand, bad weather has come as a damper. 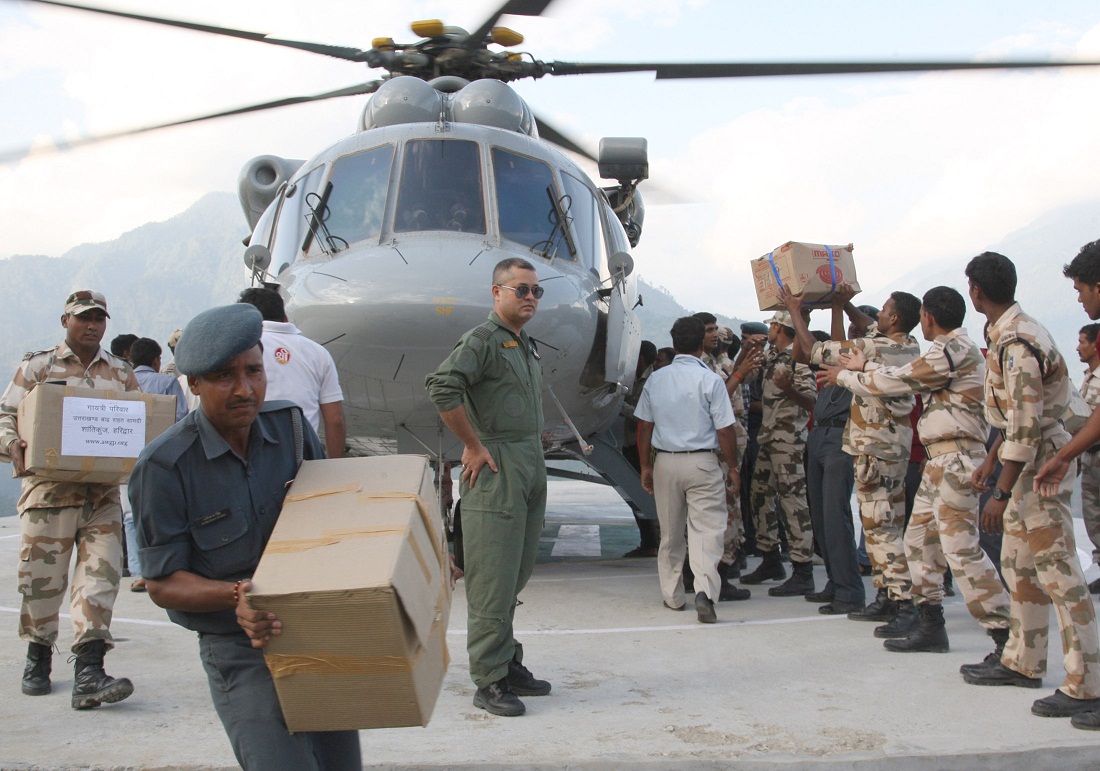 Dehra Dun : In perhaps what may be termed as the biggest relief and rescue operation in thew country, where 43 private and Indian Air Force helicopters are undertaking ferries to the higher reaches of Uttarkhand, bad weather has come as a damper and some of the sorties had to drop food had to be abandoned as the choppers could not reach the high rise areas because of clouds.

Meanwhile a private helicopter carrying food packets and other items for those stranded at and around Kedarnath, crashed when its rotor blade hit the side of the mountain.

However, army and IAF personnel who were present at the spot managed to save the pilot of the chopper.

The incident has made the pilots flying under extremely trying circumstances more cautious.

Despite the number of helicopters having been pressed into service, the task of reaching and evacuating all those who remain stranded at various points is awesome.

According to official figures though almost 34,000 persons had been evacuated, but there is still about 50,000 persons who remain stranded at various places.

Official sources said that reaching them was a problem as the IAF helicopters are big and cannot land at the ground where there are not big fields for the choppers.

More over the floods and rains have made the land slushy, which is also posing problems for the big birds. Under these circumstances, ITBP and NDRF personnel are also being entrusted with the task of making make-shift helipads so that the IAF helicopters can land.

Meanwhile efforts are being made to streamline the working of the helplines and control room that has been set up, so that the large number of people who have come from various parts of the country to k now the whereabouts of their near and dear ones can be helped. The names and addresses of the persons who remain missing are being carefully taken down.

Even those who are being rescued are being asked whether they have the names and addresses of those who may have been stranded with them and from which particular area they had been evacuated, so that the information could be shared with the people who have gathered here, as it would provide them with some information of their kith and kin.

While the anger of the people, those who have been evacuated, those who are still to be evacuated and the people who have gathered here, against the state government and concerned authorities is understandable.

It has been five days and the stranded have yet to be rescued and the control rooms do not have any exact information to offer regarding the missing.

Boldies of the dead have started reaching Haridwar and Shyampur and police teams have been stationed at both places so that the bodies can be fished out.

Over 50 bodies were taken out of the Ganga today at these two places and they have been photographed and documents made so that the required information could be given to those searching their near ones.

Incidentally, the Jagadguru Shankaracharya of Jyotipeeth is of the view that a place should be made where the akhand deep can be lit at the Kedarnath temple, as the temple cannot be without the traditional lamp being lit.

He was also of the view that the authorities of the Badri-Kedar temple committee should make necessary arrangements to clean the temple complex of the debris.

However,pilgrims from the area who have managed to reach Dehradun said that cleaning the temple complex was a mammoth task as huge boulders had come inside the temple with cascading waters and removing them was a gigantic task.

They also felt that bodies would still be littered in the area, as it is feared that hundreds may still be buried under the debris in and around the temple complex and soon the bodies would start rotting, filling the area with unbearable stench.