Dehra Dun : It was not funny but humiliating to see the state which has lost about 5000 sq kms of forest cover ever since it came into inception in Nov 2000, shedding crocodile tears on the sad state of affairs by organising functions and seminars on the World Environment Day on Wednesday. 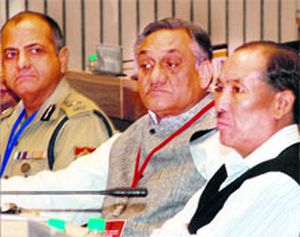 And even as tall claims were made for preserving the fragile ecology and environment of  Uttarakhand, little thought was given to the fact that similar tall claims had been made on this very day last year, but not one of them had either been out into practice or implemented.

Apparently it has been the bane of this small mountain state to make tall claims and promises, as with neither accountability nor credibility, leaders here have become more attuned to speaking for the gallery and getting space in the media rather than for things happening at the ground level.

It may be recalled that last year speaking at the World Environment Day function organized by the Uttarakhand Pollution Control Board, chief minister Vijay Bahuguna had announced a complete ban on polythene in the state. It is another issue that a similar ban had been announced by one of his predecessors, Ramesh Pokhriyal ‘Nishank’, a couple of years before.

Despite the announcements, first by  ‘Nishank’ and later by Bahuguna, the sad truth is that polythene is being used as it was before and there has been no change in the situation, despite some raids having been made by the concerned authorities at various shops as a deterrent. And chief minister Bahuguna had said polythene will be banned in 30 days.

Then there was also talk of making an environment directorate, something similar to that in Himachal Pradesh, so as to keep a watch over the fragile ecology and environment of the state, but then in the one year that has lapsed, the directorate has yet to take shape.