New Delhi: Twin sisters from Haryana, Tashi Malik and Naungshi Malik, who recently scaled the highest peak in the world, Mt. Everest, now aim to summit the highest peaks on each of the seven continents. 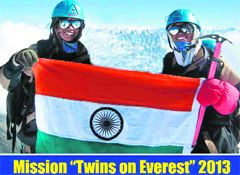 The sisters, who met Haryana Chief Minister Bhupinder Singh Hooda here today, said they wanted to set a record of twins having summitted the highest peaks in each of the seven continents.

The twins, who set foot atop the Everest May 19, hail from Anwali village in Sonepat district of Haryana, 200 km from here.

Hooda told the twins: “We are proud of your great achievement.”

Tashi and Naungshi dedicated their feat to creating awareness against gender discrimination and female foeticide.