Srinagar: A storm of sorts has hit the separatist camp in Kashmir with a senior leader publicly accusing colleagues in the movement of building “palaces over the graves of martyrs”, a statement seen as laying bare the rift in the ranks. 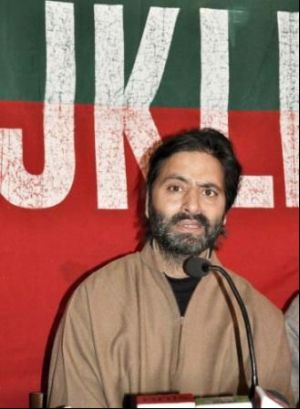 Jammu and Kashmir Liberation Front (JKLF) chief Yasin Malik walked out of a seminar in Kashmir University earlier this week after he was reportedly told by some separatist leaders not to speak about the separatist movement during the function.

Malik later issued a statement saying some separatist leaders had become rich because they had built “palaces over the graves of martyrs”.

While Malik’s statement has ruffled many a feather in the separatist camp, another senior leader, Shabir Ahmad Shah, is believed to be on the verge of leaving the moderate Hurriyat group headed by Mirwaiz Umer Farooq.

Though sympathisers and insiders are trying to bring the two groups of the separatist Hurriyat Conference together, the appearance of differences in one has seriously jolted the possibility of reconciliation between the so-called hardliners headed by Syed Ali Geelani and the moderates headed by the Mirwaiz.

The united Hurriyat, which was formed in 1993 in the aftermath of the separatist violence that began here in the early 1990s, split into two groups in 2003. Efforts since then to bridge the differences between them have met with little success.

The split came when Geelani accused another separatist leader, Abdul Gani Lone, of fielding proxy candidates during the state assembly elections held in 2002.

Lone’s son Sajad Gani Lone of the People’s Conference has also tried his luck at the hustings.

Sajad contested the 2008 Lok Sabha election from the Baramulla constituency, but lost to Abdul Rashid Shaheen of the regional National Conference (NC).

Reports suggest that Sajad has drawn an elaborate list of candidates for the forthcoming 2014 assembly elections in the state. Sajad’s brother, Bilal Gani Lone, still represents the People Conference in the moderate Hurriyat group.

The surfacing of strong differences among Kashmiri separatists indicates that ideology, ego and personal interest have worked overtime against the unity of the separatist leadership.

Many recent local media reports suggest that the NC is trying to forge some kind of an alliance with the Mirwaiz.

While the Mirwaiz has categorically denied such media reports, there have been times in the past when the generally perceived anti-India Mirwaiz family has “helped” the NC.

In 1983, Farooq Abdullah of the NC and Mirwaiz Muhammad Farooq addressed a huge public rally in Srinagar announcing the forging of what was then popularly known as the “double Farooq alliance”.

The Mirwaiz family has a huge following in the old city areas of Srinagar, which is largely believed to be the family’s political stronghold.

The mainstream opposition People’s Democratic Party (PDP) has blamed the NC for trying to woo the Mirwaiz, at least to the extent of asking the people in Srinagar to boycott the 2014 elections.

The PDP believes a boycott by the majority of the people in Srinagar would benefit the NC as its city-based leaders “specialise in bogus voting by ferrying supporters from one deserted polling station to the other during poll boycott”.

The bad news for the local separatist leaders is that their differences have become public at a time when media reports suggest Pakistan’s new Prime Minister Nawaz Sharif “might not host them like general Pervez Musharaf”.

Paradoxically, slogans once seen as part of the separatist campaign could be used by mainstream politicians to attract voters during the next assembly elections in 2014.