Mumbai: Bollywood actress Nafisa alias Jiah Khan, who was seen opposite Amitabh Bachchan in “Nishabd”, committed suicide at her residence in Mumbai’s Juhu area, police said today. She was 25. 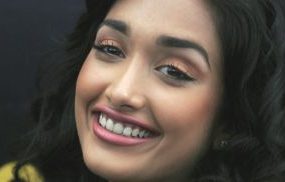 The Britain-born actress was found hanging at her flat in Sagar Sangeet Building in the posh Juhu area of northwest Mumbai around midnight. The cause of the suicide is not yet clear, police said, adding that autopsy reports were awaited.

The body of the actress was taken to the Cooper Hospital in Vile Parle Monday night and later shifted to J.J. Hospital in Byculla.

“The body was brought here last night. It has now been taken to the J.J. Hospital,” a source from the Cooper Hospital told. However, he didn’t reveal why the body was moved.

Police are questioning her domestic help, security personnel and neighbours to ascertain what could have triggered the extreme step.

News of her death was first reported by actress Dia Mirza through a social networking site around 1.45 a.m.

Jiah shot into the limelight in 2007 with Ram Gopal Varma’s “Nishabd” in which she plays a teenager besotted with a man old enough to be her father. She got a Filmfare Best Debutant nomination for the role.

“Shocked and choked to hear about Jiah,” Varma tweeted after hearing the news.

“Never seen a debutant actress with more spunk and more spirit than Jiah when I was directing her in Nishabd,” the director said in another tweet.

In 2008, she was seen along with Aamir Khan and Asin in the blockbuster “Ghajini”, a remake of A.R. Murugadoss’s Tamil film by the same title.

She was born Nafisa and changed her name to Jiah before going back to her birth name. Her mother is Rabiya Amin, an actress in the 1980s who was seen in the Tahir Hussain movie “Dulha Bikta Hai”.