Miami: The winner of the largest lottery prize ever awarded to a single person in the US is a 84-year-old Florida woman, who showed up to cash in her Powerball ticket and collected some $370.8 million, before taxes. 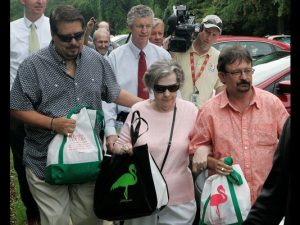 Gloria C. Mackenzie’s ticket was the only one sold that matched all six numbers in the May 18 Powerball lottery drawing, which at the time had accumulated over the previous two months a record jackpot worth $590.5 million.

Although she had the option of receiving the money in 30 annual payments of $19 million each, Mackenzie – who lives in the central Florida town of Zephyrhills – opted to take the lump-sum payment of $370.8 million, even though her total winnings would be substantially less.

Once taxes are deducted from the winnings, she will be left with about $270 million, Florida Lottery Secretary Cynthia O’Connell said at a press conference at the state lottery headquarters in Tallahassee.

Mackenzie came to the lottery headquarters to have her winning ticket validated, but she did not make any verbal statement to the press.

However, in a communique read by O’Connell, Mackenzie said, “While in line at Publix, another lottery player was kind enough to let me go ahead of them in line to purchase the winning Quick Pick ticket”.

The numbers on Quick Pick lottery tickets are generated automatically by the machine that dispenses the tickets.

“We are grateful for this blessing of winning the Florida Lottery Powerball jackpot and appreciate the interest of the public, the State of Florida and the lottery,” Mackenzie said in the statement, adding a request for privacy and referring any further inquiries to her lawyer and her financial adviser.

O’Connell said that the woman came to the lottery headquarters accompanied by her son Scott, her financial and legal advisors and several trusted family friends.

The winning numbers on the $2 ticket were 10, 13, 14, 22, 52 and Powerball 11 and that combination made it the most profitable ticket ever sold for a lottery in the US, lottery officials said.

Although there have been larger jackpots in past lotteries, they have always been shared among two or more ticket-holders, and this is the largest one ever won by a single person.

In March 2012, for instance, a Mega Millions lottery jackpot of $656 million was divided among several people who had the winning number combination on tickets they had purchased in three separate states.

Mackenzie had 60 days from the May 18 drawing date to claim her winnings.

Powerball is played in 42 US states, the District of Columbia and the US Virgin Islands.