Shimla: The Himachal Pradesh government today continued its operations to airlift tourists stranded for the past four days in Kinnaur district, which has been entirely cut off following landslides, an official said here. 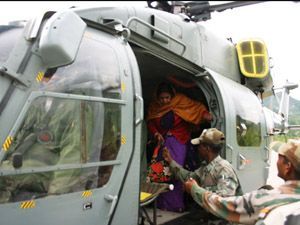 He said in the past two days, 253 tourists were evacuated.

Official sources said over 1,100 tourists, mainly from West Bengal, are still stranded across the district, mainly in the Sangla Valley and Pooh.

“But we have got 360 requests from the stranded tourists and the locals. Out of these, 253 have been rescued,” Garg, who is monitoring relief and rescue operations, said.

However, the Indian Air Force, which has deployed two choppers Tuesday, could not conduct sorties till today afternoon, owing to non-availability of aviation fuel in Shimla, an official said.

Incessant rainfall in the region over the past few days triggered massive landslides that blocked most of the roads in this remote district.

Superintendent of Police G. Shiva Kumar, based in Rekong Peo, said 14 people have been killed, including five members of a family, in landslide and rain-related incidents in the district since Sunday.

“The road clearing operation today speeded up, as the weather remained clear throughout the day. But still, it would take more than a week to reopen all major roads,” he said.

The Hindustan-Tibet Road leading to the China border along Kinnaur is blocked at several locations, officials said.

Meanwhile, UPA chairperson and Congress president Sonia Gandhi today telephoned Chief Minister Virbhadra Singh, who was also stranded in Sangla for over 60 hours and airlifted Tuesday, and expressed grief at the loss of lives and property.

Besides, Home Minister Sushilkumar Shinde in a telephonic conversation with Virbhadra Singh, assured him of all necessary help from the government of India over the loss of life and property in the state.

The chief minister requested Shinde for adequate central assistance to cope with the loss, an official statement said.