Chandigarh: Rescue operations were on late today to save 52 villagers marooned on an island in the flooded Yamuna river, state government officials said here. 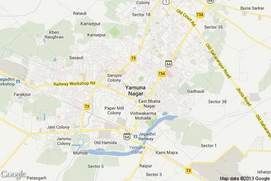 Indian Air Force helicopters have been pressed into service and the army was on standby to rescue at least 52 residents, including 15 children, of village Lapra in Yamunanagar district, 110 km from here.

They have been stranded on an island in the Yamuna since today morning.

The people had gone to the island to collect musk melons and water melons from the island. They got stranded after a flash flood following the release of 3.4 cusecs of water from the Hathnikund barrage in Yamunanagar district. The release of water led to the river flowing at the danger mark.

A Haryana government spokesman said there has been no loss of life and property.

He said a company of the National Disaster Management Authority (NDMA), comprising 50 personnel, is en route to Lapra from Ghaziabad and IAF helicopters at Bathinda and Sarsawa were ready to take-off.

“They are equipped with night vision facility. However, the weather does not permit the helicopters to fly to Lapra at present. The army in Ambala is also on standby,” Mohan said.

He said efforts to bring the stranded people to the river bank by boat were being hampered by fast currents in the Yamuna.

The state government has issued flood water warning to district authorities downstream of the Yamuna in Karnal, Panipat and Sonipat districts. The river flows into Delhi from Sonipat.