Lucknow: A woman from Uttar Pradesh gave birth to twins on a moving train – the second time in four years that she has delivered twins in a train!

The bizarre coincidence took place Sunday on board the Kushinagar Express. Zubin Nisha, along with her husband, was travelling from Mumbai to Gonda for delivery when she went into labour in the general compartment (S-10) between Unnao and Lucknow. 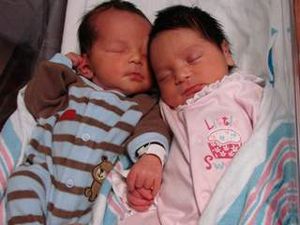 As the train chugged ahead, alarmed fellow passengers cleared the area around berth 63 and made room for other women passengers to attend to the woman.

Some passengers called railway staff and alerted a medical team stationed at Lucknow of the “developments on the train”. The medical team was kept on standby mode.

Before the train could reach Lucknow, however, the woman gave birth to twin boys. Both the babies were handed over to the waiting medical team, safe and healthy.

The mother and the twins were immediately wheeled away to the Queen Mary Hospital here, officials told.

Habibullah, the proud father of the twins, said they were going to their village Kundera in Gonda when his wife went into labour in Kanpur. But before he could decide on de-boarding the train, the train moved, and he was left with no option but to wait till the train reached Lucknow.

“I am very thankful to Allah and my fellow passengers who helped me a lot,” Habibullah told, adding that he and Zuben have four-year-old twins, a boy and a girl, who also arrived in a moving train.

Cradling the two babies, Habibullah said he was feeling on “top of the world” and shared the amusement of his co-passengers that his wife had delivered twins twice in a moving train.

“Well, indeed this is some sort of a record, but what can I say,” he said, sounding a bit surprised himself. “I can call this a rare blessing of god almighty that my kids come into this world in such a manner,” he said.