Indian Muslims’ antipathy towards the Bharatiya Janata Party (BJP) is known. The party hasn’t thought much about Muslims in term of being equal citizens. Instead it has worked tirelessly to antagonise a community that comprises more than 15 percent of the Indian population. 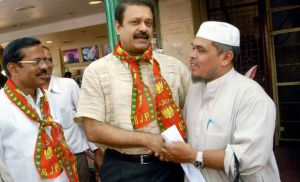 It has raised demands for Muslims to abandon their places of worship, tried to provoke riots and in many cases failed to act while a state burned and burned. But Muslims too have to share the blame for antagonising the BJP, by never showing an inclination towards thinking it as an option.

In recent months, many BJP leaders have said conciliatory words towards the second largest religious community in India by promising to give minority status to the Aligarh Muslim University and higher development funds for the community besides other usual slogans of development. But so far Muslims haven’t spoken a single word on BJP or their strategy about the general elections due in 2014 that may take place this year.

Syed Shahabuddin was silenced by the Muslim clergy that loves to live in the past when he said that Muslims should seek apology from Narendra Modi for Gujarat 2002 riots and give him some basic demands to fulfill to show his sincerity. It would have been a litmus test for BJP’s perceived prime ministerial candidate. But the so-called Muslim leaders pounced on a defenceless septuagenarian Shahabuddin and forced him into silence.

The Jamiat Ulama that held some sway on Muslim votes in West Bengal, Assam and western Uttar Pradesh besides pockets in Maharashtra seems fragmented in a leadership fight between Mahmood Madani and Arshad Madani. They used to enjoy some bargaining power vis-a-vis the Congress but have lost the clout due to infighting.

The less said about others, the better. Muslim leadership is non-existent in our country, and the Muslim community is looking rudderless, unable to find a leader who can guide it in such trying times.

The best course for Muslims would have been to talk to the BJP, despite its communal past and its role in the Babri Masjid demolition. Moshe Dayan, one of the brightest generals of Israel, once said: “If you want to make peace, you don’t talk to your friends. You talk to your enemies”.

Muslims must talk to the BJP. Given the pathetic condition of the Congress and the sort of breakdown of UPA we are witnessing, the BJP can come to power at the centre. And the man who Muslim leaders even refuse to acknowledge can manage to become the prime minister.

The next general elections are slated to be held next year. But as Sharad Pawar and other UPA leaders have made it clear, the elections may be held even earlier. Muslims should devise a strategy to negotiate with the BJP and talk to it on mutual issues of interest. Muslims should be diplomatic. Indian Muslims need to talk and not to become vote bank and hostage to one party’s hegemony in the country.