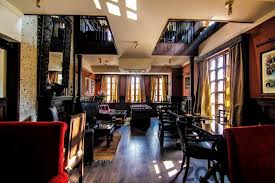 New Delhi,: Indian chefs often experiment with the recipes and ingredients, true! But a spicy and crispy ‘Crab Samosa’ served with mango chutney is something that would surely make you think about the level of creativity and imagination of the chefs.

Also Butter Chicken tandoori Pizza is another example of perfect fusion of Indian and Italian recipes and ingredients.

Executive chef Amit Kundal at Thirty Nine Restaurant and Bar in Hauz Khas Village, said: “We serve Anglo-Indian food here. We do experiment with the ingredients because we want to serve the best to our visitors. We don’t want to bore them with ordinary dishes, which is being served at every other food joint.”

Just months old, Thirty Nine opened in February this year and the restaurant is a replica of a Britisher’s house.

As we entered the restaurant, we saw a huge drawing room-cum-library section, donned with huge leather sofas. A perfect place to relax and read books while savouring a cup of tea.

If you love partying, indulge in live jamming sessions by local bands every Wednesday and Friday.

One can also sit at the terrace and enjoy the view of the old fort and lake.

The brothers Dushyant and Mohit Kakkar say they took inspiration for the restaurant from a Britisher named Alistair Kensington, who visited India back in 1930s to study Indian culture and mysticism. But he disappeared in 1939. People say he used to visit spiritual leaders (tantriks).

“When we heard the story, the idea struck. And we created a Britisher’s house. It’s all our imagination and creativity. We hired an American interior designer (my friend’s boyfriend) and he did everything,” said Dushyant, who also owns an Indian restaurant Invitation in North Delhi.

The wood panelled walls, adorned with photographs of Indian spiritual leaders remind us of Indian history.

Cricket bats are also hanged on the walls, indicating British people’s fondness for the game.

“The entire planning and execution took us a couple of months. Initially, at a place like Hauz Khas, which has many themed cafes, it was difficult for us to come up with an innovative theme. And here we are, we are getting good response from visitors,” added Dushyant.

Asked why have they named it Thirty Nine, Dushyant said: “Firstly, Alistair disappeared in 1939, and secondly, there are total 39 stairs from ground floor to the second floor.”

We made ourselves comfortable on the sofas and the western classics being played in the background set the mood for the evening.

We began our delightful meal with juicy and peppery Prawn Cocktail Salad served with sliced boiled eggs and cabbage leaves.

Chef, who has also worked with brands like Hyatt Regency and V Spot, then served non-vegetarian starters like Barbequed Chicken Wings with Blue Cheese dip and Basil Fish Tikka with Mint dip. Along with the starters, we ordered for icy green coloured mocktail prepared with fresh kiwi and sugar.

Of the two starters, fish tikka emerged as a winner. The green coloured savoury was nicely marinated with varied herbs and spices like basil, rosemary, black pepper, red pepper and cardamom. The mint dip was perfect as an accompaniment.

However, chicken wings were slightly overcooked. And the meat wasn’t that soft. But, Blue Cheese made up for the taste.

“Since we serve Anglo-Indian cuisine, the delicacies are fusion of ingredients that are used here and abroad mainly Australia and Britain. Here we usually eat chicken wings or fish tikka with mint chutney, lemon and sliced onions but we serve variety of cheese dips with tandoori starters,” said Amit, an Indian Hotel Management alumni.

He added that the menu is temporary and they will soon start serving the global cuisine.

For the main-course, we opted for restaurant’s signature recipe, Lamb Shepherd’s Pie served with buttered peas and carrots. The peppery chopped lamb was topped with mashed potatoes. The dish was nicely cooked and presented.

Chef informed us: “Britishers used to prepare the dish using beef. Since we don’t eat beef here, we use lamb. The lamb is finely chopped and tossed well with various spices like basil, rosemary, demiglaze (ground flour) and black pepper. A layer of mashed potatoes is put over the chopped lamb. Boiled peas and carrots are served with it to provide a flavour.”

Born and brought up in Himachal Pradesh and now settled in Delhi, Amit continued: “Ingredients including vegetables and meats like fish, crabs, prawns, lamb are easily available here.”

We found butter chicken average. The one that is served at the duo’s another restaurant is much better than what they served here.

We ended our meal with New York Cheese Cake and chocolate brownie with scoops of vanilla ice cream.