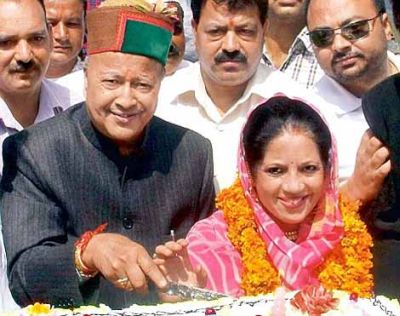 Pratibha Singh, who was elected to the Lok Sabha in 2004 after she defeated the BJP’s Maheshwar Singh, is now pitted against BJP’s former minister and sitting legislator Jai Ram Thakur.

Sources in the Congress said she would file her nomination papers May 30 in Mandi town, while four-time legislator Thakur would file his papers June 1.

The Mandi seat, the Congress’s pocketborough, fell vacant following the resignation of Virbhadra Singh from parliament after he was elected to the state assembly in December 2012.

Congress leader and former telecom minister Sukh Ram, 84, belongs to Mandi town and commands influence in the constituency. He won in 1991 and 1996.

The Congress, which returned to the state just five months ago after defeating the BJP, is hopeful of retaining the Mandi seat, say political observers.

Virbhadra Singh won the Mandi seat in 2009 by a margin of over 13,000 votes by defeating BJP’s Maheshwar Singh. Both are now members of the state assembly.

The Mandi parliamentary constituency, which includes Kullu, Mandi and some areas of Chamba and Shimla districts, besides the tribal-dominated assembly constituencies of Kinnaur and Lahaul and Spiti, is one of the largest constituencies in the country.

Poll officials said the last date for filing nominations is June 5, and counting of the votes will be held June 27.