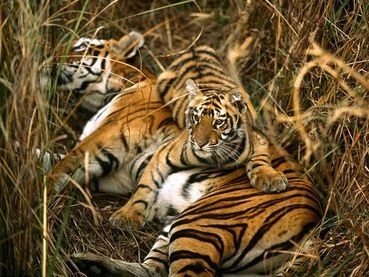 Dehradun : Uttarakhand is known for the large number of felines that are killed here annually. It may be tigers or leopards, poachers are known to be active in the forests while man-animal conflict is the bane of leopards in this small mountain state.

Apparently in a bid to ensure that the tiger population in the state gets some reprieve and the forest department becomes more concerned on the deaths of the felines , the Central government recently gave approval to grant a tiger reserve status to the Rajaji National Park.

[box type=”info” size=”large” style=”rounded” border=”full”]Established in 1983, the Rajaji National Park
, which spreads over an area of over 840 sq kms and is better known for its large elephant herds that have almost spread panic in the adjoining villages and townships.[/box]

However, after some tigers had been spotted in the Chilla and Dhaulkhand blocks of the Park area, they had probably come over from Corbett and because of the large herbivore population available, specially in the form of spotted deer and barking deer, made it their new home, the Uttarakhand government had sent a proposal to the centre that it be granted the status of a tiger reserve.

Incidentally, with the Park getting the status of a tiger reserve, Uttarakhand will now have two tiger reserves, the other being the famous Corbett National Park, named after the legendary shooter, Jim Corbett. An additional area of 300 sq kms will be added as buffer area to the existing over 820 sq kms on being granted the tiger reserve status.
Officials of the forest department here felt that as the Rajaji Park is a known habitat of wild elephants, and now as it has got the status of a tiger reserve also, there would be no paucity of funds, as it will now get the benefit of both project tiger and project elephant.

But the presence of a substantial number of van gujjar population in the Park area, and the fact that some of its members had earlier poisoned a tiger on suspicion that it had killed one of their cattle, there are fears that there could be conflict between the gujjars and the animals, unless some action is taken and they are rehabilitated outside the Park area.