Shimla: Students Central Association (SCA) backed by activists belonging to Students Federation of India (SFI) held a silent protest on the campus here today laying blame on the university and the vice-chancellor for being unable to spend grants sanctioned by University Grants Commission (UGC).

About 100 students participated in the silent rally by marching from the university gate to the vice-chancellors office, earlier in the day.

SCA President Rahul Chauhan said that the university authorities were resorting to increasing fees and hiking other charges by saying that the there was a money crisis around. 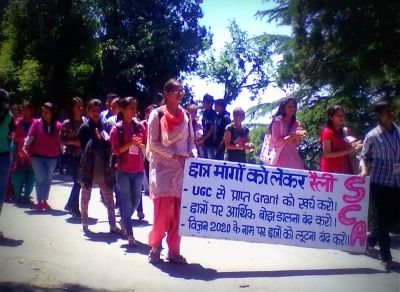 We held a protest march against the vice chancellor for failure of the university to use UGC funds for the welfare of the student community. Increasing course fees charges at various departments is not acceptable,” said Chauhan.

Priyanka Chauhan, Vikram Kayath and other SCA leaders also blamed the university authorities over misuse of the premises.

The student’s body has also questioned whether the university was really in a financial crisis.

“What was the need for preparing a Vision 2020 document of taking the university to new heights when there are not enough funds to back such a vision,” says Rahul Chauhan.