Shimla: Special bus service for women, started with a view to provide them a safe atmosphere, has proved to be a successful initiative of the Himachal Roadways (HRTC) for security of women in Shimla, as it makes travel convenient in a male dominated society. 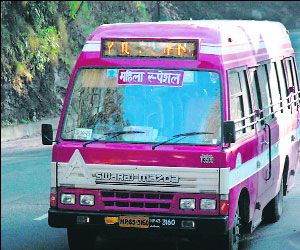 Rise in crime against women brought to light by Delhi gang rape case had HRTC initiative a bus service especially for women in Shimla which creates a safe environment for them to travel in.

The transport corporation took this decision at a time when people in different parts of the country were holding protests, dharnas and rallies against the government over ensuring safety of women.

The women special buses are plying in different routes of Shimla like Sanjauli, BCS, Bus Stand and Boileauganj, making it comfortable for Shimla women to travel while getting rid of the harassment of having to travel in male crowded private buses.

Appreciating the efforts of HRTC to take an important step towards women safety, a local resident and a school teacher Mrs. Raksha Bhandari said, “Before the start of this service, I had to face a lot of problems while travelling in local private buses in which no respect is shown towards women. Himachal government has for the first time taken such an important decision which reflects its concern for women.”

With the cities rising population, HRTC needs to start more such buses in Shimla, a service introduced on Women’s Day.

Long time city resident Mr. Sandeep Chauhan says, “A decision to start special buses for women should have been taken long time back, as it has become very difficult for women to travel in overloaded private buses.

Women do deserve a special place, and reservation of 33% seats for women displayed in most buses only serves the interest of the transporter to absolve of any responsibility as hardly anyone follows the rules, said Chauhan.