New Delhi: For long the tourist attractions of the desert state, six hill forts of Rajasthan have made it to the Unesco World Heritage site list this year. 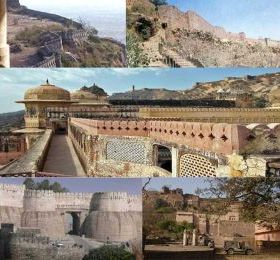 Four of the six forts are protected by the Achaeological Survey of India and two by the Rajasthan state archaeological survey.

Katoch said the nomination dossier of the hill forts was prepared by the state government of Rajasthan and was sent to the World Heritage Site centre in January 2011.

A two-member team from the advisory body of the International Council on Monuments and Sites (ICOMOS) visited Jaipur in November 2012 and held a meeting with the state government and ASI officials. Following this, the ICOMOS recommended that the hill forts be part of the World Heritage Site list.

While the nominations of the six hill forts were accepted, the Great Himalayan Park near Kullu in Himachal Pradesh was rejected.

Katoch, however, said that the government will pursue it again next years along with Rani Ka Bagh in Pattan in Gujarat.

As of now, India has 23 monuments in the Unesco list, of which 19 are protected by the ASI and six are natural sites.