Gurgaon: Workers from various trade unions staged a sit-in here today in support of sacked employees of car-maker Maruti Suzuki and condemned the May 19 police action on agitating workers at Kaithal in Haryana, a union leader said. 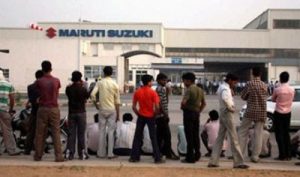 The protestors alleged that the state government and its officials were working for the industry-managements.

The protestors demanded action against officials responsible for the alleged atrocities against terminated Maruti Suzuki workers protesting peacefully in Kaithal May 19.

They also demanded the cancellation of orders for the sacking of Maruti workers from the Manesar plant and the immediate release of arrested workers.

“More than two hundred sacked workers were protesting peacefully in Kaithal for the last two months. They were cane-charged by police May 19 when they tried to approach a minister’s house to submit a memorandum,” Kuldeep Janghu, general secretary, Maruti Udyog Kamgar Union, told.

At the Gurgaon sit-in, the workers demanded a Central Bureau of Investigation probe or an inquiry by a Punjab and Haryana High Court judge into the July 18, 2012 violence at Maruti’s Manesar plant.

The violence claimed the life of a senior company executive and left nearly 100 people injured.

Maruti sacked nearly 2,500 workers, including 546 permanent employees for the violence. A total of 147 workers, including then worker union’s office bearers, were arrested for their alleged involvement in the incident. They are facing trial.