Gurgaon: Congress leader V.C. Shukla, who was critically injured in the Maoist attack on party leaders in Chhattisgarh, has shown a little improvement but continues to be critical, doctors attending on him said here today.

“He has shown signs of improvement, we are hopeful. But he is still critical and recovery will take some time because of his age. He is still in intensive care and on ventilator but conscious,” a doctor treating Shukla at the Medanta Medicity told. 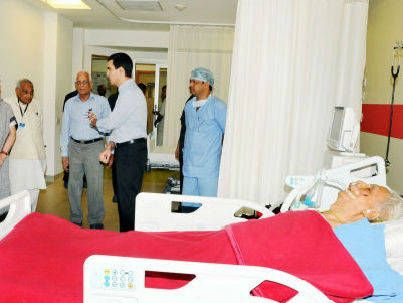 “We had performed exploratory laparotomy surgery (a diagnostic tool that allows physicians to examine the abdominal organs) Sunday as soon as he was admitted here.”

Shukla, 84, a former union minister, received three bullet injuries and lost a lot of blood in the attack on a Congress convoy in Chhattisgarh’s Bastar region Saturday. About 30 people, including two senior leaders, were killed.

Shukla was flown in an air ambulance to Delhi Sunday, and taken to the hospital in Gurgaon, where a multi-disciplinary team of doctors is treating him.

“He has suffered three gunshots – two in chest and one in abdomen and multiple injuries. We are continuing to give high-end antibiotics to contain the infection,” the doctor added.

Shukla belongs to an old Congress family; his father Ravishankar Shukla was the first chief minister of reorganised Madhya Pradesh. V.C. Shukla was inducted into the union cabinet in 1966 by then prime minister Indira Gandhi.