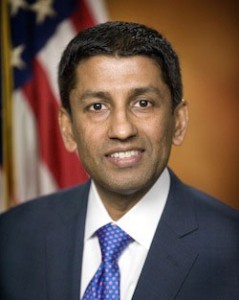 Washington, May 24 (IANS) Chandigarh-born Indian-American legal luminary Srikanth ‘Sri’ Srinivasan made history Thursday as the US Senate confirmed his nomination as a top US judge in a 97 to 0 vote.

Srinivasan, 46, currently principal deputy solicitor general of the US, would be the first judge of South Asian descent on the powerful appeals court for the American capital, often called the nation’s second-highest court.

He was expected to win confirmation as President Barack Obama’s nominee to sit on the US Court of Appeals for the District of Columbia Circuit, by a wide margin as the Senate Judiciary Committee approved Srinivasan by a vote of 18 to 0.

Born in Chandigarh, Srinivasan immigrated to the US at the age of four. His family settled in Lawrence, Kansas, where his father was a mathematics professor at the University of Kansas, and his mother taught at the Kansas City Art Institute.