New Delhi: It was a blazing weekend across northern plains and central plateau of India which reeled under the intense summer heat. Temperatures today soared to 47 degrees Celsius in Maharashtra’s Nagpur, and over 43 degrees even in Himachal hills. No respite is expected as the dry heat is likely to continue. 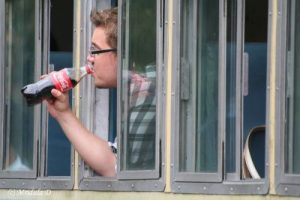 According to the Met office, Delhi saw its hottest day of the season with the mercury at 44.6 degrees Celsius – five notches above average. Monday is expected to be hotter still.

The intense heat kept Delhi’s streets and roads deserted as the weekend revelers chose to stay indoors. “It felt like I was being baked when riding my bike. The heat was unbearable,” said Ramesh Singh, who lives in east Delhi.

Even for those who chose to remain indoors and at home, life during the day was miserable.

“My air conditioner was not effective. It was blistering hot,” said Simi Singh, a housewife in Delhi’s Mayur Vihar.

The temperature in the capital Monday is expected to hover around a high of 45 degrees and low of 27 degrees Celsius.

Orange city Nagpur – which is the geographical centre of India – Saturday recorded a maximum of 47 degrees Celsius, making it the hottest place in the country.

An intense heat wave has been sweeping across large parts of India fromthe plains of Punjab and Haryana to Maharashtra’s Vidarbha region even as early monsoon has arrived in Andaman and Nicobar islands.

The Vidarbha towns of Wardha and Bhandara, as well as the Konkan and north Maharashtra regions recorded temperatures above 45 degrees yesterday.

“The weather will continue to remain dry and heat wave conditions are likely to prevail over Vidarbha in the next 24 hours (Monday),” said V.K. Rajeev, director of India Meteorological Department’s Regional Meteorological Centre in Mumbai.

Scorching summer heat sizzled most places in Haryana and Punjab today, which also recorded temperatures of over 45 degrees Celsius.

Hisar in Haryana was the hottest in the two states with the mercury hitting a high of 46 degrees Celsius, five degrees above what is the average for this time of the season.

Narnaul recorded a high of 45.5 degrees. The minimum temperature today was 29 degrees Celsius, the highest low in the region.

In Punjab, the Sikh holy city of Amritsar and industrial hub Ludhiana were the hottest with highs of 45.4 degrees Celsius. Patiala town recorded a high of 44.4 degrees.

In Punjab, the temperatures were 6 to 7 degrees above average at most places.

Chandigarh had a high of 42.1 degrees, four degrees above average.

The hills of Himachal Pradesh were hot today with Una recording a maximum temperature of 43.2 degrees Celsius and state capital Shimla a high of 29.1 degrees Celsius, which was a whopping 6.5 notches above the average.