Lahore: Indian death row prisoner Sarabjit Singh, who was admitted to a Lahore hospital after being savagely attacked in jail, died Thursday, a media report said. 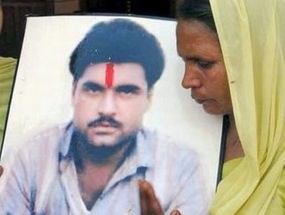 The head of the medical panel of the hospital was quoted as saying that Sarabjit succumbed to injuries at 12.45 a.m. (Pakistan time) or (1.15 a.m. Indian standard time)

Sarabjit had suffered serious head injuries after being attacked by two prisoners at Lahore’s Kot Lakhpat jail April 26. He was on ventilator support since then.

“It is very sad. We are sorry that we could not save him. I had tried to stop his family from going back to India (Wednesday) since his condition was very bad but they went bac”,” Shiekh told the channel.

The post-mortem will be conducted Thursday morning, he said.

Sarabj’t’s family, including sister Dalbir Kaur, wife Sukhpreet and daughters Swapandeep and Poonam, had gone to Lahore Sunday. They returned to India Wednesday morning alleging that they were not being given information on his medical status.

“We are shattered. He has been sacrificed,” his family said.

“We” have heard this sad news. We tried our best to save him,” “Raj Kumar Verka, vice chairman of the National Commission of Scheduled Castes, who was helping the family, said in New Delhi.

On Wednesday night, the Indian external affairs ministry said that his condition was “serious and critical”.

Indian High Commissioner to Pakistan Sharat Sabharwal met Pakistan Foreign Secretary Jalil Abbas Jilani as India Wednesday asked Pakistan to release him on “humanitarian and sympathetic grounds” or to send him to a third country for “proper treatment”.

Earlier Wednesday, Pakistan acceded to Indian request for daily consular access to Sarabjit Singh, 49, who had suffered critical head injuries after unprovoked and sudden assault by four to five prisoners April 26 in the Kot Lakhpat jail.

He had been on ventilator life support since. Doctors had reportedly indicated that he was “clinically dead”.