The shift came as a surprise as state Additional Director General of Police (Prisons), Meeran Borwankar had Tuesday said the actor would not be shifted from the Mumbai jail in the near future. 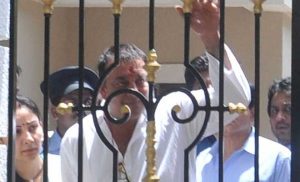 Sanjay’s lawyer had made an oral submission in the special TADA (Terrorist and Disruptive Activities) court the day after his surrender that the actor had been kept in the ‘anda’ cell, where 26/11 convict Ajmal Amir Kasab had been housed. He had complained that the cell was without ventilation and proper lighting.

Before his surrender May 16, the actor had been chased by fans and a battery of media-persons and was mobbed outside the special court premises, raising concerns about his security.

However, both police and jail authorities had assured adequate security for Sanjay who has claimed to be under death threats from some unidentified fundamentalist groups.

The court permitted Sanjay to get home-cooked food and medicines along with a thin mattress and pillow for a month but rejected his demands for carrying with him other personal and toiletry items, and electronic cigarettes.

The actor, who was convicted under the Arms Act in the 1993 Mumbai serial blasts case by the TADA court, has already served 18 months in prison.

Sanjay’s conviction was upheld by the Supreme Court in March which also reduced his six-year sentence to five. The actor will now have to serve another 42 months in jail.

Earlier this month, the apex court rejected his review petition seeking extra time to surrender as he wanted to complete his pending movie assignments.

The incarcerated actor is expected to serve the remainder of his 42 months of jail term at the Pune’s Yerwada Jail, which is Maharashtra’s biggest in terms of capacity and among the largest in Asia.

The Yerwada Jail had in the past housed Mahatma Gandhi, and decades later, anti-corruption crusader Anna Hazare on its sprawling 512-acre complex with a capacity of around 3,500 prisoners.