She walked into my study with a sort of aggressive authority that has become the hallmark of younger TV interviewers, custom made for shrill current affairs chat shows.

‘Should our prime minister accept the invitation of Nawaz Sharif who invited our Vajpayeeji by bus and then stabbed him in the back in Kargil?’ This is the rough translation of her question in Hindi. 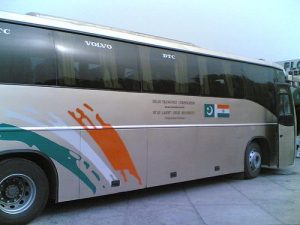 As anyone can see, she is all over the place on facts. That evening I gasped when she shrieked on her TV show titled ‘Kargil ka Hathyara’ or the Murderer of Kargil. This was about Sharif.

Thank god, the infection has not spread. One or two did jump the gun just in case they were left behind in the TRP stakes but were pulled back by someone in the wings.

Since Sharif has anchored his friendship overture to 1999, the date of the so-called Amritsar-Lahore bus journey, the journey will be brought into focus repeatedly. Because I was on that bus, it may be useful to clarify that the Amritsar-Lahore journey did not exactly take place.

Yes, a bus with Vajpayee and his impressive entourage did drive from Amritsar but the journey was terminated at Wagah border. Prime Minister Sharif and his information minister Mushahid Hussain received Vajpayee in the no-man’s land between Attari and Wagah.

From this safe location, the two prime ministers travelled by a Pakistan Army helicopter to the VIP Government Guest House in Lahore. The rest of the Indian delegation drove in cars. There were no crowds along the 25 km highway.

Obviously, in Pakistan, there was some tension with the security apparatus which could not guarantee an incident free journey for the Indian prime minister if crowds were allowed to assemble along the route. The easiest way to avoid any complications was to airlift Vajpayee, exactly from no-man’s land.

In Lahore, the establishment was unable to manage the crowds mobilised by the Islamists. This was before 9/11, mind you, and the global anti-jehadist jehad. Vajpayee did visit Minar-e-Pakistan as a grand gesture. But the gesture caused the Jamaat-e-Islami to respond most inelegantly: they washed the Minar to cleanse it of whatever taint may have stuck to it.

The evening’s banquet hosted by Vajpayee in the Lahore Fort was delayed because mobs obstructed the Indian delegation.

Following their respective nuclear tests in May 1998, leaders of both the countries had come under severe international pressure to yoke themselves under a treaty for friendship and nuclear restraint. That is why, the Lahore Declaration is a historic document signed by Sharif under domestic circumstances and a national mood he was not totally in control of.

In retrospect, there appears to have been so much pressure on both sides that pre-summit preparations were clearly inadequate. On his side, Sharif was unable to bring all major internal stakeholders like the army on board. Vajpayee hoped that Sharif would somehow cope.

Pervez Musharraf therefore started out on the wrong side of president Bill Clinton and had his ears tweaked when the US president spent five days in New Delhi and only five hours in Islamabad.

Of course, Musharraf proceeded to become something of a pet with George W. Bush. He took on himself the blowback from the Afghan war climaxing in the post Lal Masjid catastrophe.

Sharif escaped being implicated with the Americans at a time when Pakistan was in the grip of anti-Americanism on a scale unknown before. It was a potent combination of this fact along with spiralling Punjabi chauvinism which has enabled him to trump Imran Khan’s even more strident anti-Americanism.

This verdict for Sharif is heavily concentrated in Punjab, a situation custom made for centrifugal pulls.

It is deft of him to have extended a hand to Imran Khan. But the verdict for the MQM in Karachi is developing into a confrontation. MQM’s Altaf Hussain has congratulated Sharif and nurses a grievance that his gesture has not been reciprocated.

Altaf Hussain’s plaintive cry ‘Let us go if you don’t like our election results’ is a repeat of his speech at Acton Town Hall outside London in 2000. ‘Pakistan is a historic mistake, if all of us do not have an equal share’.

He then had Baloch, Pushtoon and Sindhi leaders on that platform. Today he is all alone, jabbing out like a cat which is cornered. For the MQM, is this an existential battle?